Back in 2004, after the earthquake in Bam, I was quoted by IPS News Agency, saying "Islamic authorities are only efficient when it comes to putting down protests and in their terror operations. Their efficiency is in death, destruction and suppression, not in saving lives"

Ten years later, the same is still true. Last week tragic scenes of two female workers in a factory jumping to their deaths while the building was engulfed in flames was captured on mobile phone cameras by passers by. The video footage has gone viral and reported widely in the Iranian media.

What has stirred the emotions of people in Iran about this tragedy, apart from the distressing pictures of two helpless women falling to their deaths, was the gross incompetency of the fire brigade in its rescue operation and the callous reactions shown by the Tehran municipality officials afterwards.

The first fire engine which arrived on the scene failed to operate its ladder to reach the women. The women held on desperately, hoping the fire brigade will have a jump cushion they could jump on to, but the firemen couldn't pump up the jump cushion either, or as some reports suggest,  they didn't even have one. Amazingly the firemen then started aiming their water jets at the two women instead of pointing them at the fire. This made the fixtures wet and slippery and impossible to hold on to and the women fell to their deaths.

Massumeh Abad, female member of the Tehran municipality who coincidentally was returning from a meeting with the Supreme Leader and witnessed the rescue operation, told the Iranian reporters "the technical fault which happened with the fire engine's ladder, can happen in any computer operated equipment, which is why sometimes even the giant aeroplanes fail to open their landing wheels". Massumeh Abad, also added that 5 people were finally rescued and "5 out of 7 wasn't so bad"

Other officials also reacted in a similar nonchalant manner and none have resigned or accepted any responsibility. Instead, two of the firemen involved in the rescue were arrested yesterday, one of them is the fireman in charge of operating the ladder.

People in Iran have compared the bungled rescue attempt with the ruthless efficiency the Islamic Republic displays in sending its balaclava wearing forces to abseil people's houses and dismantle their satellite dishes (see picture above). Just like I told the IPS reporter ten years ago, "Islamic authorities are only efficient when it comes to putting down protests and in their terror operations. Their efficiency is in death, destruction and suppression, not in saving lives"

Below is a captured footage of another incident. This time its the fire brigade in Zanjan, attempting to put out the fire. Thankfully, there was no one in the car to be rescued on this occasion:

Posted by Azarmehr at 2:43 AM No comments:

Jackass Straw and his "Scientific Observation" from Iran 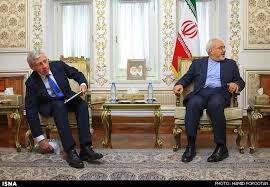 When three US newspapers actually bothered to read Khomeini's writings and published accounts of Khomeini's reactionary and anti-Western views, Henry Precht, the Head of US State Department's Iran Desk during Carter's administration, attacked the three US newspapers by saying they were "severely misleading and scaremongering" and likened the newspaper articles that revealed the true nature of Khomeini, as “at best a collection of school student notes and at worst a forgery”.

Well now with hindsight we know who was a forgery and who was a school student! But the naivety and childishness of these Western politicians continues to this day. Jack Straw's "scientific observation" in the Independent after his short trip to Iran, is nothing short of the foolishness of the Carter administration officials in 1979 resurrected.

Jack Straw and his British companions on their trip to Iran, were wined and dined by the Islamic Republic establishment and were shown what the regime wanted them to see - bit like North Korea hosting tourists there. Straw's entire delegation had other agendas, other than carrying out a "scientific observation" from the onset of the trip. Lord LaMont, with his lucrative business dealings with Iran as a director of the Bali Group plc and Jeremey Corbyn, probably the most leftwing member of the Labour Party with his regular column in the Morning Star, had their business and political agendas to satisfy for the main objective of their trip.

Unlike the European delegation of MPs who went to Iran before Straw's trip and met with Iranian dissidents; Straw's delegation had no such courage. They were happy to carry out their "scientific observation" by meeting just one side and not scratching too deep below the surface.

The fundamental cause of people like Straw and the Carter administration making such comical and tragical misjudgements is that their criteria for evaluating Islamic Republic officials is not examining their track records and deeds or read their writings, just nice smiles and nice words suffice. 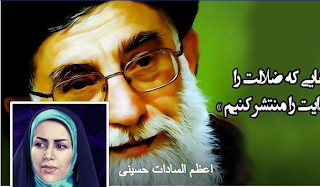 After Islamic Republic's Minister of Culture and Islamic Guidance told Aljazeera English that he wants "Facebook for everyone", I thought it might be revealing to tell the story of Azamolsadat Hosseini, the female spokesperson for the municipality of Behshahr, who was sacked from her position last Wednesday; for having a facebook account.

As you can see from the screenshot of her Facebook page  here, she is in no way an opposition figure. Even after her sacking, she expressed total obedience to the Supreme Leader by saying with over the top adulation that what the Supreme Leader says in Iran is the final word as far as she is concerned.

What she posted on her facebook account was no more than messages related to religious occasions or how her day went during a typical working day at the municipality, much similar to what Islamic Republic's foreign minister, Javad Zarif, posts on his facebook.

Of course there is an important difference, which allows Zarif to have a facebook account in the Islamic Republic but rebukes the spokesperson of Behshahr in North Iran for having a facebook account. Zarif's facebook is useful for manipulating the international public opinion and for portraying a lustrous shop front window for the outside world. This is not the case for ordinary Iranian citizens and that is why they have to use anti-filters to circumvent the internet censorship that restricts them to facebook, other social media and many other informative websites.
Posted by Azarmehr at 3:42 PM 3 comments: