Below are excerpts from Nasrollah's speech made to mark the 40th day, a Shia tradition after someone dies, for Mustafa Badreddine's death:

Sanctions against Hezbollah are useless

Our budget, expenses, food, missiles, weapons, and everything else all comes to us from Iran

As long as Iran has money, we too have money

Hezbollah has no business plans or investment centres

The money allocated for us, does not come to us directly, neither through banks,  just like we get the missiles with which we threaten Israel with

Hezbollah is grateful to Iran’s Supreme Leader, the president, the administration, the Majlis, Grand Ayatollahs and the honourable people of Iran for supporting our resistance, Iran’s support continues and we have no financial problems"

And here is what John Kerry ass-u-me-s :

Posted by Azarmehr at 6:39 AM No comments: 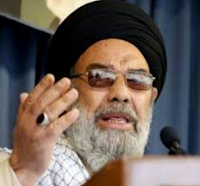 The Western media headlines of "Moderates Swept to Victory in Iran Elections" was baffling to many who follow Iran news closely and have a better understanding of what is going on and who is who in Iran. Of course since the New York Times Interview with Ben Rhodes, now we know about his "echo chamber" lapdogs, the Laura Rozens and Barbara Slavins, and the "narratives" they were supposed to produce. And so the narrative for the recent Iran "elections" was supposed to be something along the lines of 'because of the nuclear deal, Iran's moderates have received a huge boost and it was a big set back for the hardliners!'..yeah right!!

I have written before about this 'good cop/bad cop'  game the Islamic Republic plays with its moderates v hardliners, much in tune with how the KGB used to play it in Romania under Ceausescu,  and also how former murderers and paedophiles were re-branded as "moderates" in the last Iran election game. So just to hammer the point home a bit further, I thought I share with you this footage of Isfahan Friday Prayer leader, Ayatollah Tabatabaei-Nejad's sermon, made last Friday.
This very Ayatollah was one of the nominees for Iran's "reformist" list of candidates that the BBC Persian "Iran analysts" were recommending the people of Iran to vote for! His victory to represent Isfahan in the Assembly of Experts was hailed as a triumph for Iran's "reform" movement!

Here is the footage below, followed by the translation of the sermon below. Judge for yourself, with "moderates" like this, who needs "hardliners"?!


"They have brought me pictures yesterday that shows women by the side of this dry river [Zayandeh-rood], whose actions will ensure the upper stream of the river will become dry too. Believe me its true! You may ask yourself why do European countries with so much crime and sin have so much rainfall? Yes the Koran says we do not punish the unbelievers, and even if it didn't cause Muslims so much anxiety we would make their [kuffar] roofs made out of gold, God punishes the believer, God punishes the Isfahani, for remaining silent and letting girls and women take pictures by the river as if they were in European countries, you expect the representative of the Supreme Leader to do it all by himself? I tell you he won't.
Even when Imam Ali, saw the people were not backing him, he sat in his house and stood silent against all the crimes that were taking place around him, if we dont have the people's backing our hands are tied! Neither the Supreme Leader, nor his representative nor the Law Enforcement Forces which I must thank..I get reports of what they do, they do a lot, they stop a lot of cars [women driving cars with loose hejab], they stop people walking dogs, but thats not enough, they need your help.. Imam Khomeini started the cultural revolution, and they have meetings and say some things, but whats the point? its all talk and meetings, my beloved ones, the principle of promoting virtue and preventing vice is not specific to the Supreme Leader or a specified official, everyone has the duty to do it, just like you have the duty to fast, as soon as you walk out of your house you should tell your daughter, your neighbour etc. what is virtue and what is vice

What our great Imam Khomeini once told us was 'what scares us is cultural dependence and not sanctions or military invasion' and so we shouldn't fear sanctions or military invasion but we should fear cultural invasion, it will destroy our revolution and the blood of our martyrs will go to waste, we must not make excuses like 'oh I told that woman but she stood up to me!" so what if she stood up to you? You stand up to her too!
I am not saying beat her up, but do tell her!
they tell me in some of these social media sites, they have formed groups who call themselves fast-breakers! they message each other and ask to see each other breaking their fasts by showing what they are eating for lunch! This is standing up to religion, these are hypocrites!
Or another one has set up a group against Hejab and they ask each other to send their pictures with no hejab. they say they have 1500 members!
I here by tell the Telecommunications company, if you can identify these people but are not after them, then you are traitors to Islam!
These people who confront the fasting and confront the Hejab are hypocrites and hypocrites are worse than Kuffar! they should be arrested and not released soon!
I asked and the communication company said they can find these people, well find them! shut them up! strangle them! we can't just sit still and say such things are taking place! and just kiss our teeth in disapproval!"
Posted by Azarmehr at 4:10 AM No comments: 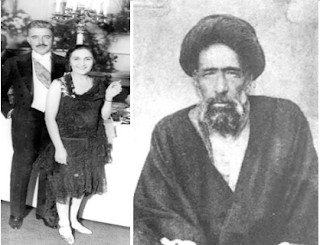