19th Anniversary of the Massacre of Iranian Political Prisoners

Nineteen years ago, during the months of August to September, a hideous crime was taking place in Iran. As Ayatollah Khomeini drank the "posion chalice" and signed the peace treaty with Saddam Hossein, he feared the release of the Iranian political prisoners would result in organising the mass discontent of how the war was handled, into a serious political challenge to the establishment of the Islamic Republic. Thus personally, in his own handwriting, Khomeini gave the go ahead for the massacre. He wanted absolute fear to reign over the population in the aftermath of the war.

Iran's political prisoners were called in to face kangaroo courts of three clerics. The prisoners were asked two questions each, "Do you believe in Allah?", "Are you prepared to renounce your organisation?". The prisoners had no idea about the consequences of their replies. In fact a 'No' to any of the above questions meant immediate execution. Many of the prisoners had already finished their prison sentences but were still not released, some were even brought back after they had been released.

The victims included teenagers, whole families, men and women. During the months of August and September, all prison visits were cancelled, families were told not to bring any medicine or food for their loved ones. All this time the killing inside Iran's prisons continued.

Those executed were buried in unmarked mass graves on the outskirts of the towns. In Tehran, one mass burial was accidentally discovered by an Armenian priest who had become curious as to why stray dogs kept digging there for bones.

Even the successor to the position of the Supreme Leader, Ayatollah Montazeri, could not stay silent about the crime and protested to Ayatollah Khomeini. His protests resulted in his removal from the position of successor to Khomeini and his house arrest for the last 19 years. Yet while an Ayatollah protested at this massacre, the rest of the world remained silent and offered no sympathy.

Watch the documentary, The Tree That Remembers, to learn more about the 1988 massacre of Iranian political prisoners.
Posted by Azarmehr at 7:42 PM 7 comments:

It comes as no surprise to read Ray Takeyh's latest article in the Financial Times, where true to his typical ways he tries to knock down a potentially effective action against the Islamic Republic, that of designating Iran’s Revolutionary Guards as a terrorist organisation, and instead suggesting some mumbo jumbo of "comprehensive dialogue encompassing the totality of differences between Islamic Republic and the US to arrive at some common perspective....". In other words lets buy Islamic Republic more time, the pivotal objective of Takeyh's hidden agenda and that of his gang.

Seyyed Hossein Nasr's mafia has done so well in the past to confuse the hell out of the US State Department about Iran. During my IVLP visit to US last Novemeber, we had a meeting at the US State Department. We were told that the US does not have a policy of regime change in Iran, instead the US policy is changing the behaviour of the Islamic regime! So I asked, "OK, how do you intend to change the regime's behaviour?" The reply was, "we have a website" :)) and what a load of bollocks that website was.

Desperately trying hard to hold back my laughter at such naivety and stupidity, I felt like leaving the meeting there and then and saying "Good luck with changing the regime's behaviour through your website". Seyyed Hossein Nasr's tentacle of "Iran Experts" had done a very good job of influencing such idiotic policies at the State department.

I wonder if 10 months further since our IVLP visit, Hossein Nasr, his son Vali, Ray Takeyh and the rest of this IRI sponsored mafia can still pose themselves as unbiased "Iran experts". If so, we have some very dangerous times ahead.
Posted by Azarmehr at 10:47 AM 7 comments:

Just before going to US, I got a chance to meet Nazanin Afshin-Jam in London but I just didnt have time to write about it. She was just as I expected her to be, friendly and down to earth and very dedicated.

It was more than a year ago I wrote this post about Nazanin and it was such a joy to meet this wonderful and kind person face to face .

I wish her all the best for all the good work she is doing.
Posted by Azarmehr at 2:47 PM 2 comments:

The Old Dinosaurs of the Past and VOA Persian

If anyone ever doubts Fakhravar, when he refers to Nasser Zarafshan as a hardened Stalinist, they only need to read Zarafshan's own latest writing where he rebukes Abbas Milani, for having turned back on Mao:
http://web.peykeiran.com/vs2005/article_body.aspx?ID=11439

The above is in Persian only unfortunately, English readers just have to trust me. The first thing anyone who can read the article will ask, will be 'my God, which decade does the author live in? and when will he move on from worshipping the likes of Mao and Stalin?'

However for those who follow Iranian politics, all this should not come as a surprise. For we all know that the old dinosaurs of the Iranian Left, never moved on from the mumbo jumbo and the misconceptions of the 60s and 70s. The "good old years" where they imagined, those living under Mao and Stalin had prosperous happy lives and had reached the highest form of human society :))

What should be surprising however, is when Voice of America(Persian) presenter describes a worshipper of mass murderers like Stalin and Mao as an Iranian national hero!! purely because Zarafshan was a good friend of her dad! This brings us to another bad trait of the previous Iranian generation, that of nepotism and promoting your own friends only. It is this very characteristic of the old Iranian generation that has turned VOA(Persian) into a closed shop of "our own friends only", which denies air time to an important dissident figure like Fakhravar, much more appealing to the younger Iranian generation, yet promotes the old Iranian dinosaurs who are no longer relevant to the young Iranians. This is why an important event like the Prague conference, does not receive due coverage by the VOA(Persian), because Fakhravar was there, yet a pathological liar with a shady past, who has failed his exams in International Security in Reading university is promoted by VOA Persian to the Iranian viewers, as an "expert" in International Security and thousand more examples like this.

If we want to change Iran, its no good just getting rid of the Ayatollahs from power, we have to change the mentality of the old generation that led us to this mess in the first place. How can we do this at VOA(Persian) however, when its one of the most unaccountable American institutions I have ever come across.
Posted by Azarmehr at 8:30 PM 6 comments:

I have finally returned to UK after spending four weeks of, I am not kidding, hard labour in America. I can not recall having worked this hard and been so anxious in my entire working career. For the first time in the last 28 years, there were days that I did not read and follow up Iran related news, neither on TV, radio, newspapers or the internet. I was just so consumed with my work, but that was the good part, for I love my work.

The worst things I will remember however about the four weeks in Washington, will be the repressive unbearable heat and humidity and once again the encounter with the stupidest officials I have ever come across in my life, the US Homeland Security at Dulles airport. These so called Homeland Security people represent the embodiment of the worst combination. Stupid, ignorant and illiterate people who have been given a lot of power. That is a bad combination. Too much power is never good, too much stupidity is detrimental, the combination of the two is just a disaster.
Posted by Azarmehr at 11:24 PM 3 comments: 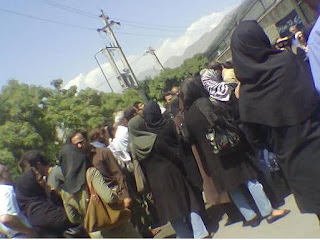 Mothers of 270 Iranian youth, who were arrested after attending a rock concert, gathered outside Karaj police station today to find out about the whereabouts of their children.

I wonder if people in the West can possibly begin to understand this. Having your children arrested and not tell you where they are kept or what is happening to them, just because they attended a rock concert!
Posted by Azarmehr at 5:44 PM 14 comments:

In Anticipation of Social Unrest 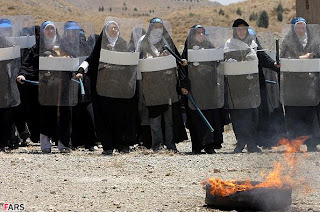 Baseej women members prepare in anticipation for social unrest and civil protests in the Islamic Republic of Iran. 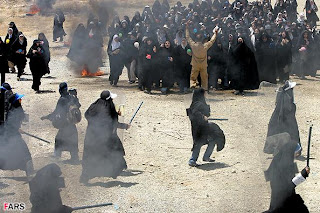 Majid Kavousifar, seen in these pictures before being hanged, left Iran for Abu Dhabi two days after the assassination of one of the corruptest and most repressive judges in the Islamic Republic. Judge Moghaddas who was assassinated by Kavousifar and his nephew, was responsible for handing out long sentences to many political activists. Moghaddas sometimes even boasted that he sentenced the accused without even reading their files!

Kavoussifar had introduced himself as the killer of Moghaddas to the American Embassy in Abu Dhabi, where he had applied for asylum. The embassy guards handed him over to the Interpol, which informed Islamic Republic's authorities of the incident.
I thought it was just the Homeland Security at the US airports who were the thickest officials in the world!

Here, Majid Kavousifar is seen smiling and saying his last goodbye. Why are so many victims smiling in these latest round of public executions? Perhaps if there is any after life, it will be better than living under the mullahs.

The film footage of the execution.

No Fear at the Gallows

Victim laughs at death and the rest seem to show no fear:

From the latest round of executions in the Islamic Republic.
Posted by Azarmehr at 3:55 PM 7 comments: