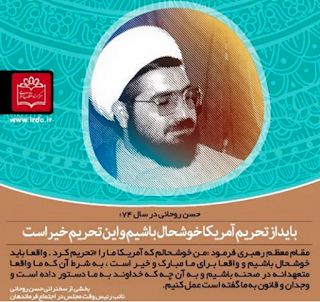 "We must be happy about the US Sanctions and these sanctions are good!" - Hasan Rouhani speaking to IRGC commanders in 1995.


Iran's Supreme Leader, Ayatollah Ali Khamenei, spoke last week to the representatives of the Baseej militia who had come from across the country to celebrate the Baseej week and hear his latest guidelines. The Supreme Leader chose the occasion to pre-warn the US law makers against the upcoming renewal of the Iran Sanctions Act (ISA).

"If these sanctions are renewed, this is definitely a violation of the JCPOA. It is undoubtedly a violation of the JCPOA. And they should know that the Islamic Republic will surely react to it”. This was how the Supreme Leader and commander-in-chief of the Islamic republic of Iran chose his words and it was followed by the audience responding with their clenched fists shouting feverish chants of “Death to America”

As it turned out, the US law makers ignored the Ayatollah's warnings and the US Senate voted 99-to-0 to extend the ISA sanctions for another ten years.

“This sanctions regime is how we hold Iran accountable, strengthen our security and deter Iranian hostility towards our allies, especially the state of Israel,” said the Democrat Senator Gary Peters and added “Diplomacy is always our preferred course of action, but it does not work in a vacuum. It only works if it is backed up with credible deterrence.”
'Credible Deterrence' being the key issue which was always missing from Obama administration's foreign policy modus operandi.

So, the question now asked by everyone is how will Iran react? Well, so far it has been a flurry of verbal condemnations and not surprisingly a growing list of Iranian officials, including members of Rouhani's own administration and Rouhani himself, are aligning themselves with the Supreme Leader in condemning the US for reneging on the nuclear deal.

Reza Akrami, head of the Presidential Cultural Council and one of the closest allies of President Rouhani whose friendship with Rouhani stretches over five decades, said "The JCPOA was a trial that proved to us, the United States does not adhere to anything"

Soheila Jelodarzadeh, female 'reformist' member of Iran's law making body, the Majlis, reacted to the Senate vote by saying "America should now expect the consequences of violating the nuclear deal"

Mohamad Reza Aref, the US educated and current darling of Iran's reformists movement, also condemned the Senate decision and said "This will now have many consequences for America"

Even the weatherman on Iran State TV decided to endear himself and started his weather prediction by saying "Well there is two things you can not rely on, the weather and America"!

Will there be more than just rhetoric?

It is also true that everyone in the Iranian establishment knows full well that the Nuclear Deal saved the Islamic Republic from an eminent economic collapse and ensured the regime's survival. The deal meant the wasteful economically unjustified nuclear program that was not bringing any tangible benefits for the Iranian population, was somewhat restricted in return for the lifting of the vast majority of crippling sanctions which were draining the regime's coffers and curtailing its military adventures in the region. It was a clear win/win deal for Iran and in no way will Iran try to terminate the agreement. The public rhetoric is just to find escape goats that can be used to explain to the public why despite the deal, their economic situation has not improved.

If the US Senate vote is a violation of the JCPOA, then Iran should resort to the 'Dispute Resolution' section in the agreement that was envisaged for such situations and if the dispute resolution mechanism does not favour Iran, then Rouhani should take full responsibility for the failure and announce he will not be running for the next election.
He was after all assigned to carry out one very specific mission, i.e. to remove the crippling sanctions and save the Islamic Republic from collapse. He did that brilliantly using Zarif's superb diplomatic skills and credentials. If Rouhani has now failed in that, as the official rhetoric from Iran and the Supreme Leader's warnings claim, then his clasp to power can only be explained by his personal ambitions to stay in the perpetual shrinking power struggle within the Islamic Republic's establishment.

Should Rouhani publicly announce now that he will not run for the office in the next presidential elections it is almost guaranteed that the current frenzy of rhetorics against the Senate approval for another 10 year extension of the ISA will fizzle out almost immediately.

Right now however, those with the ambition of wanting to remain in the power oligarchy within the Islamic Republic of Iran, are all jumping on the bandwagon of condemning the US vote as a manifestation of America going back on its word and that includes Rouhani himself! But apart from verbal condemnations and rhetoric, most likely not much more..
Posted by Azarmehr at 3:32 PM 3 comments: