Islamic Republic security forces entered the home of Iran's satirical poet, Seyyed Mohammad Reza Aali Payam, aka Haloo and confiscated his computer and writings and took him away on Tuesday 14th August.

Haloo is yet another popular Iranian poet who has been arrested in recent times. The arrest happened after the recent earthquake in NW Iran, when Haloo derided the regime's pre-occupation with other causes and the apathy the regime showed for the people of Iran, by writing this couplet  in his blog:

Who says we are an untroubled government?
We always care for the problems of the Arab people

Haloo also announced on his blog, one day before his arrest, that the Amirkabir Literary Society, where many of Iran's poets recited their poetry to the enthusiast audiences, had been shut down by the security apparatus.

Almost ten days later after Haloo was taken away, there is no news of his whereabouts.

Below is one of his poetry recitals at the Amirkabir Poetry Society, where he is reading one of his masterpieces, "Cowards"


Why is the Guidance Ministry so scared of women's hair?
What is so scary about the flowing hair in the wind?

Put on dark clothes, brown or black
For they are scared of bright and happy colours

The same way the Taliban feared from the statue of Buddha
"Our Friend", is also scared of stone, plaster and steel

You have to only kiss his hands and say Yes Sir, Yes Sir,
For he shivers from things like thought, logic and talent

Then he interrupts his poem and say please remember this poetry is meant for Yemen, don't think I am referring to anyone in Iran! then he continues:

Strike your blows on our heads and bodies
My dear, when was the mountain bothered by Farhad's axe?

There was a time that he who knew, shirked from sticks and truncheons
But now the club fears the heads that understands

The pine trees no longer fear the ax and the sickle
For today, its the ax that fears the tallness of the Pine tree

Gone are those days of fear my dear, today its the monsters
Who run away from the children of this ruined land

Laugh my countryman, laugh aloud, These laughters are a thorn
in the eyes of those who fear these happy hearts

Today is the Al-Quds Day in Iran, the day marked by Ayatollah Khomeini in the Islamic Republic's calendar to show the state's commitment in "liberating" Palestine. There will be parades all across Iran and throughout the world, including London and other European cities. In fact in London, this year, the Advertising Standards Agency, had allowed the advertising for the Islamic Republic sponsored demo to be publicised on the back of London's buses.

The footage below is from the Iranian state TV today, from Khorram Abad, West Iran. Huge megaphones ask the crowds to chant Allah Akbar in support of Palestine, but no one chants back. The speakers repeat the calls for Allah Akbar and still nothing. So the state TV plays Pirates of the Caribbean theme music and moves on

And this one is from Sari, North Iran. This time the huge megaphones chant "The Blood of the Martyrs of the Nation Boil/ The Supreme Leader of Iran Roars", but no one roars back. Everyone is busy talking to each other or playing with their mobiles!

Cabinet's Family Trip to Saudi, While the Quake Victims Suffer 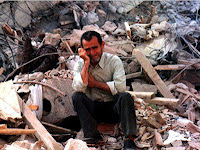 Seldom do you come across a government who cares so little about its own and yet places such high priority on someone else's cause. Saturday's devastating earthquake in NW Iran, was another manifestation of such disregard for the people of Iran by the Islamic Republic.

Iran's state controlled television simply ignored the news about the earthquake and carried on with its normal programming. People were mostly alerted about the earth quake via the social media and foreign satellite TV stations. Worse still just to add salt to injury, the IR state TV, in complete indifference to the plight of its citizens in Azerbaijan, started to show one of its few cheap tasteless comedy programs, Khandeh Bazaar - Laughter Bazaar.

Iranians gritted their teeth and whined that had the devastation taken place in Gaza or Lebanon, the state TV would be showing their suffering non-stop.

The fury and backlash was such that even the hand selected and pre-approved MPs for Azerbaijan voiced their anger at the shameless state TV and demanded an apology.

Only one day after the earthquake and while citizens were waiting to be rescued from under the rubble, Ahmadinejad and several of his ministers packed their bags, not to go to the quake zone but to Saudi Arabia, with some ministers like Science Minister and the Guidance Minister taking their family and relatives along with them too for presumably some fun and shopping.

The usual protocol at times like this by other heads of the state, is to rush to the disaster areas and be with their people even if its just for symbolic purposes. Even if they are in middle of a foreign trip, they would cancel their arrangements and rush back home. 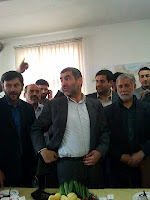 Included in this untimely cabinet trip to Saudi, is the Minister for Roads and Housing, Ali Nikzad. One would think someone in charge of Roads and Housing would be the most required official to be on the scene and evaluate the damage, especially if the minister himself is born in Ardebil and Azerbaijani himself.

This disaster once again shows that the people ruling Iran today are nothing but foreign occupiers, alien to our history and to our culture and apathetic to the suffering of our people. No wonder the post-election protesters were chanting "Neither Gaza Nor Lebanon, I Die Only for Iran" 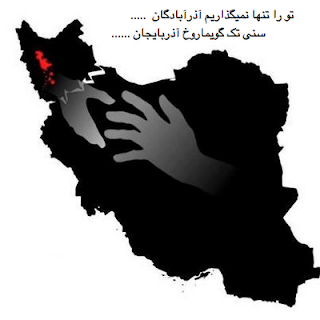 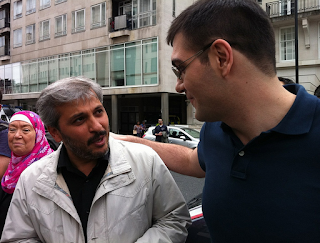