So after years of not investing money in oil refineries and instead the Islamic Republic pouring Iran's petro-dollars into terrorist organisations and efforts to destabilise the region, the petrol chicken has come home to roost. Once again an opportunity has risen where Iranian people have seen the strength in their numbers and gained confidence to challenge the authorities. Will the petrol riots be similar to the football riots, the student uprising in July 99, the six days dusk protests, or the urban riots caused by changing boundaries etc. Will the initial confidence and momentum suddenly fizzle out as a result of lack of support, brutal crackdown etc. by the regime?

I was watching the Islamic Republic state TV tonight. The situation is serious. It seemed like the country was at war. Patriotic songs were played, as they usualy are in times of crisis for the clerics, the state radio suddenly remembered our pre-Islamic and national heroes. The very people who had removed the statue of our mythical hero, Kaveh, for fear of becoming a focus for anti-regime activities, were playing songs that praised Kaveh, Arash, Rostam, kings Cyrus and Darius. An archive footage of the late Ayatollah Beheshti lecturing the volunteers for the war front was shown in which he talked about how futile sanctions and imperialist plots are when faced by people who look forward to become martyrs.

Why is the regime fearing this petrol crisis more than other protests it has faced? Well for a start, this crisis is affecting all of Iran at once. It is not just an isolated incident of an urban riot in one area where it can be crushed easily and it is not a flash in the pan incident either.

What should the opposition do? In my view the most important thing is to explain to people what a sensible secular regime, which is not bound by a fanatical Islamic ideology, will do to resolve the problem. We know why this mess has happened and we know who is responsible for it, but how would a secular alternative to the Islamic regime solve the problem? Thats what Iranian people want to know, thats what will give them the confidence to continue to challenge the regime. If the Iranian secular opposition does not provide the answer, once again without the offer of a viable alternative, people will just be content to improvise for their problems and deal with the status quo rather than make sacrifices for an unknown alternative. I wonder if such plans were even discussed in the recent Paris conference of the Iranian opposition groups or were they once again for the umpteenth time just happy that so many different groups sat next to each other under one roof and some obscure groups with zero reputation or support in Iran got promoted by Kenneth Timmerman?!

I will have limited access to the internet over the next few days. Don't be disheartened if there is delay in publishing your comments.
Posted by Azarmehr at 1:26 PM 7 comments: 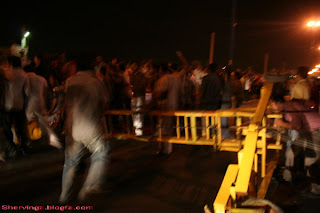 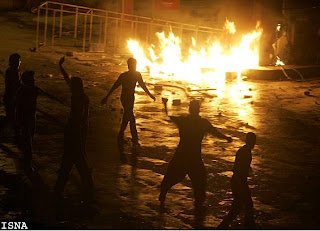 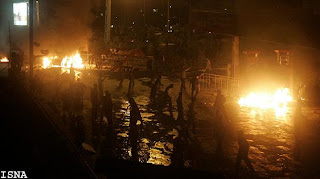 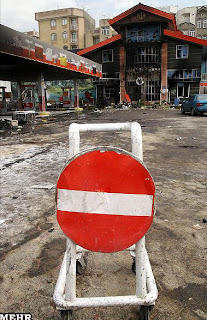 See http://thespiritofman.blogspot.com/ for upto date report.
Posted by Azarmehr at 1:29 AM 2 comments:

Iranian daily, Nowrooz, reports that the governor of Garmsar was sacked because of the low turnout to welcome President Ahmadi-Nejad.

Garmsar, in the province of Semnan, is the birth place of President Ahmadi-Nejad, and the governor was expected to stage manage a particularly big crowd to welcome the President of the Islamic Republic.
Posted by Azarmehr at 7:14 AM 5 comments: 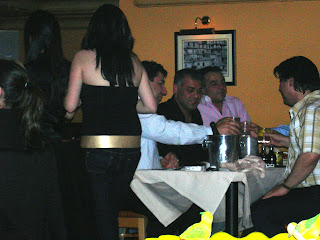 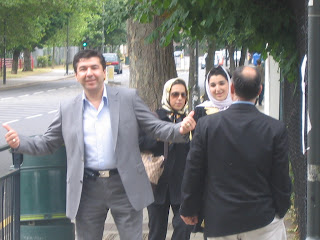 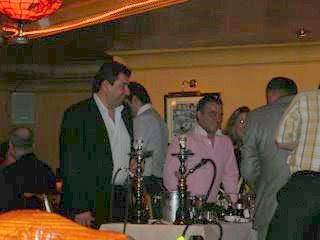 Did He Shake Hands or Did He Not?

Just after I posted the Unholy Men of Cloth and wrote about the warped priorities of those who like to publicly pretend their religious convictions, a row has broken out between the religious fanatics in Iran on whether Khatami shook hands with the Italian women he met or not? Khatami has denied it saying the film footage circulated is fake and edited and he does not approve of such things.

What pathetic little creatures the pious pretenders are, what pathetic things their single cell minds get occupied with, wherever they appear. So pathetic...
Posted by Azarmehr at 8:10 AM 5 comments:

Ever since I was a young teenager, experience led me to abhor organised religion, any religion that is. Although I respect people's personal beliefs, organised religion and the men who ran these organisations, to me have always been the ultimate displays of hypocrisy and evil.

I despise their made up hierarchies, their corruption, and the way they feed all that nonsense crap into people's heads.

Most of all, its their priorities that disgusts me. The way they react and issue fatwas, when someone writes something or draws a cartoon, or poses a question, and yet when real atrocities take place, these unholy men of cloth do not batter an eyelid. Instead they claim such absurdities as if you make a holy trip to some place or make a confession or dip in some smelly river or perform some other hollow bullshit ceremony your sins will be forgiven.

The appalling images from the Iraqi orphanage are just another testimony to my belief in this regard. An evil man who runs the orphanage has stocks of food at his disposal, yet he is prepared to let these children degrade to such inhumane conditions so he can profit from the sale of the food on the black market. How much more evil can you get? I can just imagine him making a trip to Mecca with some of the proceeds of his evil greed to wash his sins away. Yet there are no fatwas against him, there are no idiot fanatics or their "progressive" allies in the West marching in the streets with angry faces burning his effigies and demanding his blood.

Perhaps the worst of these unholy men of cloth can be found in the poorer countries. In my view they are the problem, they are the ones who are holding the people back. Until they are routed from the face of this earth, there shall be no real progress or peace in the under developed countries.

If there is a God, may he burn these unholy men of cloth in hell forever.
Posted by Azarmehr at 12:35 AM 13 comments:

Democracy And Security Conference in Prague 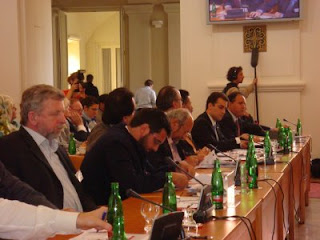 Dissidents from past and present from different parts of the world as well as academics and politicians have gathered in Prague, to discuss some of the questions on security and democracy in today's world.

Siavash Fakhravar, seated second from right in the photograph, is also one of the panelists and I believe he spoke yesterday.

Aliaksandr Milinkevich is the Belarus dissident I had not known about before. Having done some google search about him, he comes across as an impressive person. Milinkevich is 59 years old, studied physics and mathematics in France, Germany and the US. He was deputy mayor of his home town Hrodna in the early nineties. The Sakharov Prize, the prize for freedom of thought (again something I hear about for the first time) , was awarded to him last year by the European Parliament.

Also amongst the participants is of course one of my favourite characters, the former Czech dissident and president, Vaclav Havel.

Here is the statement by Reza Pahlavi for the conference:
http://www.rezapahlavi.org/speeches/?english&id=108