Majlis Commission Confirms : "Luxury Cars were imported instead of medicine"

It was a story that started in the Guardian by Saeed Kamali, the pro-Rowhani Iranian journalist who nominated Hasan Rowhani for the Nobel Peace Prize. Manouchehr Esmaili-Liousi, a haemophiliac patient had died as a result of a hiking accident and never even got to the hospital, but the story of the tragic accident was changed into a haemophiliac boy in Iran "dying in hospital after his family failed to find the vital medicine he desperately needed for his disease."

"Sanctions are Causing Medicine Shortage in Iran and Killing Patients" soon became the sexy preferred headline in the Western media. Western newspapers and news sites raced each other with similar news headlines and the Islamic Republic lobby groups in the West had a feast with yet another too common phenomenon of lazy journalism in the Western mass media. See also NIAC Profiteering from Deceit. Only the Times of London reported what was actually taking place on the ground in Iran.

Marzieh Vahid Dastjerdi, Ahmadinejad's health minister at the time, was not saying what the Western media were regurgitating, she kept publicly complaining that the $2 Billion in the annual budget, allocated to import medicine with,  was not received by the health ministry.

Islamic Republic's first female health minister, Marzieh Dastjerdi,  finally paid the price for her outspoken remarks and was unceremoniously sacked by Ahmadinejad. Now 18 months after, the Islamic Republic's Article 90 Majlis Commission, has endorsed her claims. The allocated $2 Billion with subsidised currency rate which should have gone to the Health Ministry to import medicine with, was  instead being used to import luxury cars.

Nader Ghazipour, the MP for Oroumieh and a member of the Majlis team investigating the luxury import of cars corruption said the list of companies who used subsidised currency rate to import luxury cars, amounted not to just one or two pages but to several pages and names of some government officials can be seen amongst them.

"The crime of Mrs. Marzieh Vahid-Dastjerdi, who was sacked by Ahamdinejad, was that she exposed the secrets. She said luxury cars were being imported with the medicine money and she was right" - Ghazipour told the Majlis.

A Snapshot of IR's Assembly of 'Experts' 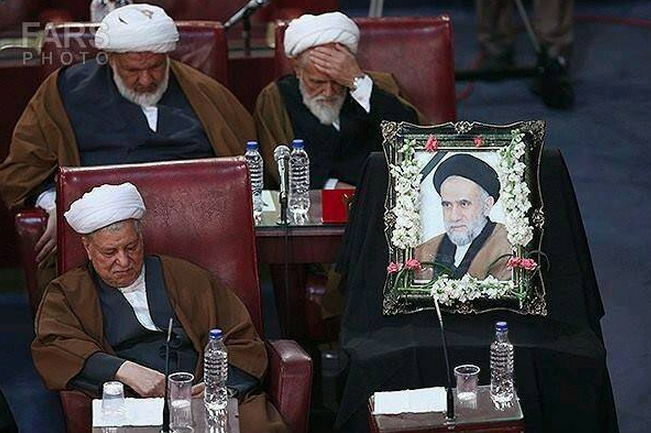 My last post was about the head of the Islamic Republic's Assembly of "Experts", Ayatollah Mahdavi Kani, showing off his expertise on Einstein and the theory of relativity.

This picture on the left is a snapshot from the 15th official gathering of the Assembly of "Experts", the powerful body which at least on paper, is supposed to choose the Supreme Leader and make sure the leader acts appropriately Islamic.

Finally the picture in the front row, placed on the chair, is that of Ayatollah Khorram Abadi who has passed away but nevertheless a bottle of water is left for him, in case his spirit joins the session and gets thirsty.
Posted by Azarmehr at 4:12 AM 1 comment:

Iran's Head of Assembly of "Experts" Speaks about Einstein!

The man shown in this video below, is Ayatollah Mahdavi Kani. He is the head of the Assembly of Experts in the Islamic Republic of Iran. A powerful body which will even decide the next 'head honcho' i.e. the next Supreme Leader of Iran.

Mahdavi Kani is also the head of Imam Sadeq university.

To understand what kind of people run the Islamic Republic and who these "experts" are, watch this video of Mahdavi Kani [English translation below]

"Einstein wrote something in which he said he had converted to Islam and had become a Shiite Muslim and that he was a disciple of Imam Ja'far Sadeq, says so in foreign books. Einstein says 'when I heard about the ascension of the prophet Mohamad' where he had ascended to heavens and come back and the house door was still shaking, a process which was faster than the speed of light. The prophet went quicker than the light that walks, I don't know how much is it? 300,000 km per second! The door knocker was still shaking and the prophet had come back and he had seen all the heavens too. This is the very same relativity movement that Einstein had understood. Similar to what Mullah Sadra had understood before him, a quintessential movement, not a positional movement like crossing the road taking ten minutes, a movement of light or rather a spiritual movement faster than the light moves, Einstein said 'when I heard about the narratives of the prophet Mohamad and that of the Ahle-Beit [prophet's household] I realised they had understood these things way before us"

Ayatollah Mahdavi Kani, who is 83 years old, has been kept alive in the past 25 years by British heart surgeons who have been treating him in St. Mary's Hospital in Paddington, London.
Posted by Azarmehr at 1:26 AM 8 comments:

Iranian female student activist, Maryam Shafipour has become the first Iranian student to be sentenced to long term prison for political activism since Rouhani became the president of the Islamic Republic.

Maryam Shafipour was an active member of Karroubi's Women's Committee election campaign team. She received a suspended sentence in 2010 on usual charges of "spreading propaganda against the 'holy establishment' of the Islamic Republic" and was banned from continuing her higher education.

In July, 2013, Maryam was detained again and spent 60 days in solitary confinement with no access to a lawyer.

Yesterday she received a seven year sentence by the notorious judge Salavati after seven months of being interrogated in prison and refusing to repent for her peaceful activism.

Amnesty international issued this statement on Maryam's plight in January this year:

Jack Straw and Lord LeMont may have the impression that things have changed in Iran and "Tehran resembles any European city like Madrid", but the truth is despite the nice shop front window for the outside world, its business as usual inside the shop.
Posted by Azarmehr at 2:17 AM 1 comment: