Two travel bans were issued against two Iranian citizens this week by the Islamic Republic judiciary, one on a 96 year old man and one on a 12 year old girl.

The 96 year old man is Dr. Ahmad Sadr Haj Seyyed Javadi, himself the Minister of Interior and the Minister of Justice in the post-revolution's provisional government of Mehdi Bazargan.


Dr. Sadr was one of the founders of the Freedom Movement, a religious opposition to the Shah which backed Dr. Mossadeq and the nationalisation of Iran's oil industry. Perhaps more ironically, he was also the defence lawyer for many of the dissident clerics during the Shah's rule, his dissident clients included the Supreme Leader himself.

A year ago, Sadr Haj S. Javadi wrote a private letter to the Supreme Leader, which was later published to the public.  In the letter, Haj S. Javadi had asked the Supreme Leader to release all political prisoners, abolish the revolutionary court and end the house arrests of Mir Hussein Moussavi and Mehdi Karroubi. Most strikingly, he apologised to the Iranian nation for his part in the revolution and having helped bring about the Islamic Republic. He asked the Almighty to forgive him for the pain he has brought about on the Iranian nation.

Sadr Haj S. Javadi's travel ban was delivered to him by judicial post and was issued by the Security Court Prosecutors in Evin prison. He has since responded to the letter by saying "I am not able to move. I mean I can barely move from one room to another. Someone has to hold my back so I don't fall and I have no wish to travel".

Mehraveh on the other hand is only 12 years old. She has committed no crime other than she is the daughter of the jailed Iranian lawyer, Nasrin Sotoudeh.

Sotudeh's husband, Reza Khandan also responded to the travel ban issued against his daughter by saying "We have no plans to travel. In my view this is an attempt by the authorities to destroy our emotional and mental well being and shock the family" 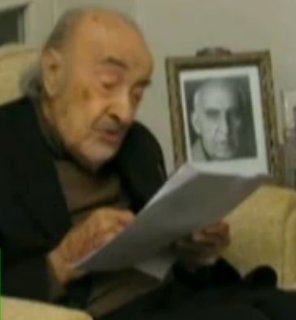 Once again this just highlights the fearful pathetic spite of the Islamic Republic. A Regime that definately has become the real life theocratic equilalent of 1984, V for Vendetta and Planet Of The Apes. Closed ears and closed minds forcing others to close mouths! In a proper democracy of course a government that now can only offer bigotry, nagativity, propaganda, twisted lies and a continued grim future for it's people would soon be voted back out onto the streets. But of course in Iran, the only way left to remove such tyranny, is for THE people to go back onto the streets!