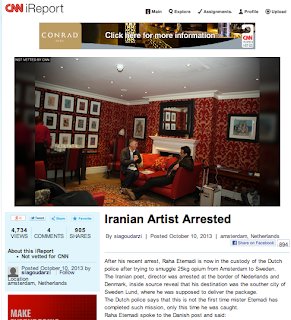 An average reader with a reasonable number of brain cells may soon realise something fishy about the story posted on CNN's iReporter site, by reading Raha Etemadi was arrested on the "border of Netherlands and Denmark"! but it seems CNN is happy to once again be of service to the Islamic Republic.
Posted by Azarmehr at 7:45 AM

One again the IRI taking advantage of lazy reporting and the fact most media stations treat them with kid gloves due to the paid off infiltration of it's Lobbyist's and Apologists! Most can't see these smug sly agents working under their very noses... If anything, it's these Khamenei stooges laughing up their sleeves far away from oppressive Iran who lead the most cosy and immoral degenerate lives in the likes of Canada, the US or London.

pot kin jan, the CNN reporter reza sayah is already working on behalf of the regime….