Baseless Concerns on How Iran's Unblocked Assets Will be Spent

There were immediate grave concerns by many on how Iran will be spending the $120 Billion it was to get back as is stipulated in the Vienna JCPOA. These concerns centred on two issues, the Islamic Republic was getting this windfall without having to implement anything in return and that the regime was most likely to spend this money on its proxies such as the Hezbollah, the Syrian regime, the Houthis, the Hashd Al-Sha'abi etc.

John Kerry made an unconvincing rejection of the above concerns in his interview with the BBC World by saying, Iran will only spend some of this on its proxies and in any case it would have carried on spending money on its proxies regardless of the windfall!

Well there is good news for those who became even more concerned after John Kerry made those statements and started questioning the sanity of the US secretary of state. Evidence has come about that Iran will spend some of that $120 Billion windfall on development and construction within Iran to improve the lives of ordinary Iranians.

Last week the revolutionary guards, amidst much pomp and ceremony, opened a new bridge in Deh Darreh, in the Lorestan province, West Iran. See picture of the opening ceremony:

All the key officials, including the local MP, who thanked the revolutionary guards for this impressive construction project, were there.

A local beneficiary of this magnificent piece of engineering was asked to cut the tape to demonstrate the regime's grass root popular support, with a revolutionary guard doing his best to keep the tape steady while it was being cut. See picture: 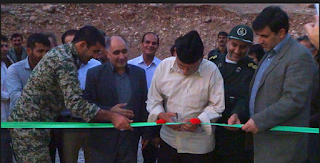 Finally, the picture below shows the full extent of this 3 metre bridge which could become listed as the eighth wonder of the world: 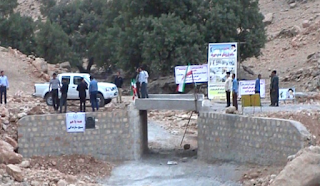 The revolutionary guards generously paid for half the cost of building the bridge [$3000], while the other half was collected from the local inhabitants.

Picture of the first car to cross the bridge, without the bridge collapsing or showing signs of wobbling. Three Islamic Republic flags adorn the full length of the bridge on both sides. See picture: