Surrounded by a Protective Light 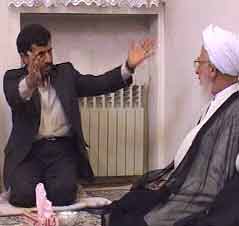 Iranian President Ahmadi-Nejad, reflected on his trip to the UN, in a meeting with Ayatollah Javadi-Amoli. Parts of this meeting have been published in the Iranian website baztab.org. See:
http://www.baztab.com/news/31076.php

In the film, the President reports that once he started his speech, reciting the opening verse of Koran's chapters, suddenly he was surrounded by a mysterious protective light. He carries on telling the Ayatollah that those present in the hall also noticed this cosmic phenomenon. "I could clearly see the audience stopped blinking once they saw the light surrounding me!" The president described to the Ayatollah.
Posted by Azarmehr at 3:30 AM