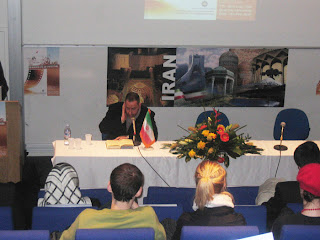 I must say the naivite of the british universities surprizes me...

It's really sad that an "Iranian Cinema Symposium" became a propaganda forum for the 1979 Islamic revolution, especially because an Iranian Cinema Symposium in of itself is a good idea. In spite of the current regime's suppresion of artistic creativity, the Iranians have been producing excellent films. The Color of Paradise is a classic and the only film that caused me to cry as an adult. The Girl in Sneakers shows how the dreams and aspirations of young people are the same the world over. The Lizard is an amusing comedy even across the cultural gap and also a good example of "writing around the edges", that is, promoting a message while being ambiguous enough to get it past the censors. You can see the spirit of Persian culture is trying to break out of its trap.

Hi
I undrestand completly how regim try to propaganda in the world.
My own recent exprience could be another good example of Islamic regim influence on british universities.
I was trying to help our student union of london south bank univerity to prepare an event for 8th of march (women's day). victor our president when heard from me how women in iran are under pressur of regim, have accepted to invite Nazanin Afshin-Jam through me for that event to talk about discrimination of women's rights in Iran.
All of the sudden university didnt support our proposal and we had to fund rising ourselves for such events from NGO's. At the same time Ali ghaphari our vice president of union, who has contact with the Islamic centre in London which is supported by suppreme leader of Iran, prepared one anti war event on 13th feburary in our university and he didnt have funding problem at all as we had.
how this money came from for them ????????

The Islamic Republic is relentless in using every tool in its disposal to deceive open minded and democratic societies of the West.West’s vision is limited to a fixation on tolerance, freedom and democracy in the present. This aspect alone makes the West completely vulnerab.Another handicap of the West is its belief that "if we are kind and just and open and play by the rules, then all others will do the same". The Muslims have no intention of playing by any rules. There is no issue of conscience and honor for Muslims before non Muslims as the Quran has absolved a Muslim from honoring his or her word or any agreement with a non Muslim.

Typical of Iranian opposition in London, while they were wasting their time demonstrating outside an empty Iranian embassy in London on a Sunday, shouting Persian slogans, the embassy staff were busy advertising and recruiting in universities!

They try to export their rootless culture but everythings in these films are concerning about Iranian culture except a few ones of them that cannot tell the truth.
Just look over at persons in these pictures who don't know what they are in that place for.
They supose that can steal other cultures and replace it instead of their sickly culture. But as I told in my perivios post, many of actors and actress in Iran help them in this case.
and a question: what are they exporting to persons who live in advanced and progressive countries?
Look at that man in picture with evils' eyes.

Have You seen this on VOA