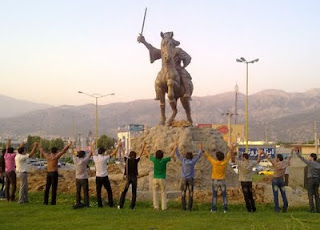 What has happened to the Cyrus Cylinder, returned to Iran - but not its rightful inheritors! - by the British museum in London??

Does anyone know the whereabouts of this precious and iconic artifact?

and what has become of the many reared in/by Iran? Fuck all.

You're full of shit with your poetry and rhetoric. better suited to old wives club novels.

They removed Statue of Ferdowsi:

This sounds word for word like the Battle of Thermopylae, even to the point of a traitor who shows the invaders!

Face it my friend, Iran's history is insignificant and only exits in the history books because of amazing Greeks such as Leonidas and Alexander!