Einstein Was a Shiite Muslim 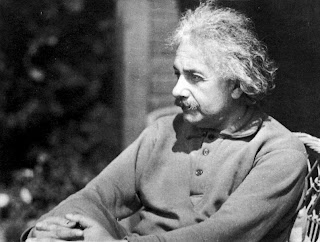 Javanoline said to be close to the Revolutionary Guards in Iran, has reported on information being circulated on the cyberspace that proves Eisntein had converted into Shia Islam. It claims that Einstein was corresponding with the late Ayatollah Boroujerdi and had admitted Shia Islam was the most scientific and just religion in the world.

Sadly because of fears that such information will cause a major international security threat that will come about as a result of a global religious conversion upheaval, Einstein's written correspondence with the late Ayatollah are kept in a safe box in London belonging to Professor Ebrahim Mahdavi. The article however publishes the special code for the safe box which is  B-۱۲-D.E/۱۷-V.A.E

The author then agonizes that if only Einstein's latest handwritings, known as Die Erklarung, be published, there would be a massive global "religious revolution" in the world.

In this secret correspondence between Ayatollah Boroujerdi and Einstein, which was clandestinely translated by a hand select number of translators appointed by the Shah, Eisntein confirms his relativity theory is mentioned in the holy Koran and some of the Hadith from the Shiite holy book, Nahjolbalagheh and the writings of the 16th century Shiite cleric, Alameh Majlisi. Einstein admits in his letters that only Shiite Islam provides the theological proof for relativity and no other religion does so.

Iran's equivalent of Youtube, Aparat, also has this interesting video about Einstein's conversion to Shia Islam:

http://www.aparat.com/v/dBZNM
Posted by Azarmehr at 3:52 AM

This blog is still around? lol...

Allah Almighty has placed healing powers in His word, the Holy Quran. He declares in Surah Isra (17) verse 82, "We send down in the Qur'an that which is a healing and a mercy to those who believe..."

In the light of the Sunnah of the Beloved صلى الله عليه و سلم and the tradition of the true pious predecessors Faqeer meets visitors for open Islamic spiritual healing, in the form of Ta’weez and/or ruqya (dam), for counseling or general Islamic advice Istikhara on Monday-Friday.

Ta'weez or ruqya are beneficial only by the Will of Allah Almighty and when practiced according to the guidance of the Messenger of Allah and his successors.

Sadly few people know this truth because, because of the religious conversion fears they kept the Einstein's letters with Ayatullah Boroujerdi in a safe box in London. But truth gets revealed one day no matter how much they try to hide this