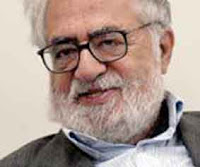 Ehsan Naraghi, who died earlier this week at the age of 86, could trace his ancestry to prominent Iranian Shia clerics in the Qajar era.

His great grandfather, Molla Ahmad Naraghi was an influential cleric   during the reign of the Qajar King, Fathali Shah, who issued a fatwa for Jihad against the Tsarist Russian troops. Like many descendants of the clerics, Ehsan Naraghi too became one of the intellectuals of the Pahlavi era.

After studying law in Tehran university, his father sent him to Switzerland where he got a degree in Sociology from university of Geneva and won a scholarship to study for his PHD in Sorbonne university. During his student years, like many of the Iranian students who were sent to Europe in those years, he first developed Left wing tendencies and became a supporter of  the Tudeh Party, Iran’s Soviet puppet Communist Party.

His Communist tendencies didn’t stop him from marrying into money. He married the daughter of one of Shiraz’s biggest landlord feudals.

Naraghi was also related to the former Empress Farah and during the peak of the Shah’s rule, through his family connections with the Empress, Naraghi got his foot in the Imperial Court  as an advisor to both King and the Queen. The Imperial Court saw him as a useful person in countering the growing Left wing tendencies of the Iranian youth at the time.

Some of the people who trained under him, like Abolhassan Bani Sadr, Sadegh Ghotbzadeh and Hassan Habibi, became important figures of the 1979 Islamic revolution.

After the 1979 revolution, he was imprisoned on three occasions. In one of his interviews I saw him mention himself that he was released after Ali Khamenei, the president of the Islamic Republic at the time, requested his release by writing a letter to Lajevardi, the butcher of Evin prison. How Ali Khamenei decided to release this former advisor of the Imperial Court, when teenage supporters of dissident groups were being executed at the time for handing out hand bills is a mystery to me. After this, he travelled freely back and forward to Iran. Those who disliked Naraghi described him as a man on a mission to make Islamic Republic look acceptable to the rest of the world.

Naraghi was a master of compromise and openly advocated compromise. He abhorred revolution saying “Revolution is an illusion and a damaging act, you never know who you are bringing to power” and openly boasted “I can work and survive with any regime”.

Nothing about Ehsan Naraghi was appealing to me, neither his background and upbringing, nor his 180 degrees turn arounds, nor his intellectual status and nor his advocacy of compromise, but more than his books and more than his research, I will remember him for what he is caught saying on this video:

“Don’t be tricked by the clerics, the lowest form of man in the 20th century are the Shiite clerics, they will tell you all sorts of lies”

And at another point when the person off the camera criticises the mixing of politics and religion and states how impossible it is for someone to be a politician and at the same time claim to 'represent God on earth', Naraghi interrupts in his usual brash manner and says
“One must fuck the mother and sister of that God who has appointed such a person as His representative on earth”

After all, because of his background and family connections, Ehsan Naraghi knew the clerics inside out and probably knew what an Iranian cleric is all about!

Disgusting man overall. Thanks for the history lesson on this shady character.