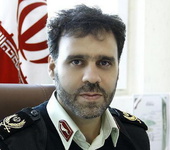 Those who remember him from his Baseej days, wonder how he was ever promoted to such a position in the police force. Clearly however, whatever police academy he attended, didn't teach him that the Interpol and the Guidance Patrol, were two entirely different entities.
Posted by Azarmehr at 12:16 AM

Well being a monkey moron who lines his own pockets is the biggest qualification you need in this black shirted Regime. That's why after Chimp Ahmadinejad, the next rigged president will either have gorilla or baboon traits. In otherwords the biggest ape puppet Khamenei can manipulate!