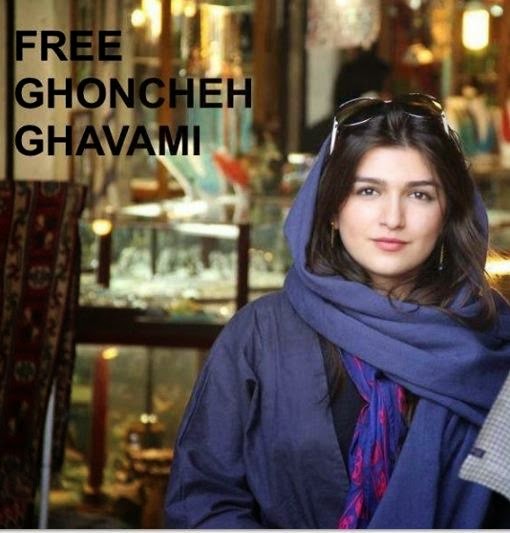 On 20th June this year, Ghoncheh Ghavami had gone along to watch Iran's national volleyball team play against the Italian side. In any normal country, this would have been a joyous event, but in Iran for Ghoncheh and other women it carried a risk. Women are not allowed to enter sports stadiums in Iran and watch men play sports like football or volleyball.

Ghoncheh and some other women, who had seen this as an opportunity to protest against this discrimination against Iranian women, were arrested. They were later released on the same day after signing a pledge not to engage in such actions again. Their personal belongings however were kept by the security forces for further examination.

Ten days later, Ghonche went to collect her personal belongings but was arrested again.  Security agents then searched her house and collected more of her belongings. Ghoncheh was transferred to the notorious Evin prison and spent 41 days in solitary confinement. Although her interrogation is reportedly now finished, they have extended her detention by another 2 months.

Her family until now had decided not to publicise her arrest, thinking that it would further harm her case and she would be released after a brief period. Since yesterday however, the opposition site Kalameh, published her arrest and continuous detention.

I knew Ghoncheh from London. She had dual British-Iranian citizenship. Ghoncheh in Persian means bud and she had lips that immediately reminded you of a red rose bud. She told me once, when she was born, as soon as her father saw her lips, he decided he could only call her Ghoncheh.

As attractive as she was, Ghoncheh was extremely and frustratingly naive when it came to Iran politics. I remember having endless arguments with her about the new administration in Iran. Ghoncheh was delighted with the election of Rouhani, as the new president of Iran. She was convinced that Rouhani was the right man to set the catastrophes of the past 8 years right and lead Iran into the future. My continuous advice to her that this was just a window dressing for the outside world and inside Iran, it will be business as usual, did not resonate with her.

I remember explaining to her that every Iranian presidency repeats the same pattern on three fronts:
1- They all start with magnificent slogans and promises
2- They all blame the previous administration for all the ills and shortcomings in Iran
3- They all continue to blame their rivals are putting the spanners in the wheels and preventing them from setting things right.
And so they keep on stringing along the new generation of voters.

But again, sharing my experience with this young naive 25 year old was to no avail. She decided not to listen to my advice and to go back to Iran, thinking she can better support Rouhani's government from inside Iran.

I was last due to see Ghoncheh on the opening night of the movie, King of Sands, made by the Syrian director, Najdat Anzour. I had two extra tickets for Ghonche and her friend but they could not make it and I never saw her again. I was not aware she had gone back to Iran and did not know she was a prisoner until yesterday.

I could say she was a victim of her own naivety but I could also say that at least, unlike many other Iranian asylum seekers who are promoting the Iranian regime while being paid benefits by the UK government, she went back to help the person she believed was the right man to save Iran. It will be a painful lesson for her, but perhaps her plight will open some other eyes.

Salam, thank you for this thoughtful post that I enjoyed reading. I am a UK citizen married to an Iranian and we live in Iran. I read this lady's story with both interest and sadness. Sad for her apparent naievete but all the same interested in her motivations which seem quite pure. As an educated person she would have known the risks. Causing trouble here is more than just frowned upon and for now it is what it is....
I have been in awe of Iran since I got here. The people of course, their generosity, easy smiles and hospitality. In addition the culture and history of the place is mind blowing to say the least. To me this is no different from KL or any other big city such as Shanghai - and I have lots of experience with both of them and elsewhere. If you play up over there you can expect consequences. However I never see the West having a go at HR in either of those countries or even Singapore which can be quite harsh to (fancy the rotan anyone?). Right at this moment in time Iran has much going for it. I see FDI is up significantly, the crane count in Tehran is mind boggling and investment into Kish Island is booming - tourism will be key to the future here. Oil and gas exports will increase as foreign companies are invited back in to explore and exploit the country's natural resources and so on. The UK wishes it could have its GDP growth %. My point is this: The Iranian people are smart and resourceful. Given an economic opportunity such as currently exists with lowering of sanctions and FDI increases, how about easing off causing trouble and pointing the finger at Iran. How about marvelling in its people its history and how quite frankly it could teach the UK a thing or two about what it takes to be a civilised society. Yes, I mean it - some family values, self respect, hard work and hospitality to your neighbours whoever they are. This as opposed to the acts of violence, drunkenness and general poor social behaviour I have seen too much of in the country of my birth where I lived until my mid 20's. Maybe if this young lady could put back into the society that accepted her by tackling the HR abuses condoned by the government and its people there: Grooming in Rotherham, Bradford and Oxford as well as the Parliament itself! Covering up of historical state sponsored murder and HR issues in the Industrial Revolution as well as tragic HR abuses as in the case of Hillsborough. I could go on. My point is that these are just as 'worthy' and definitely less risk. It would be a great way for an Iranian person to show what a civilised society is.In the meantime I have signed the petition to David Cameron. Not for the reasons given in the statement made by her brother (window dressing) but that I believe that as a human being she deserves good treatment during her incarceration, not because she hasn't done anything wrong as is suggested by the petitioner....

It is understood that you must tow the line while trying to post "the truth". Be very careful, bro.

Great work on this post! I also have a quick question about your blog, is there an email address that I can reach you at?

If Iranians themselves are so naive or ignorant, how can we expect to convince the rest of the world?