How the Islamic Republic Out Foxed Mr. Olympia 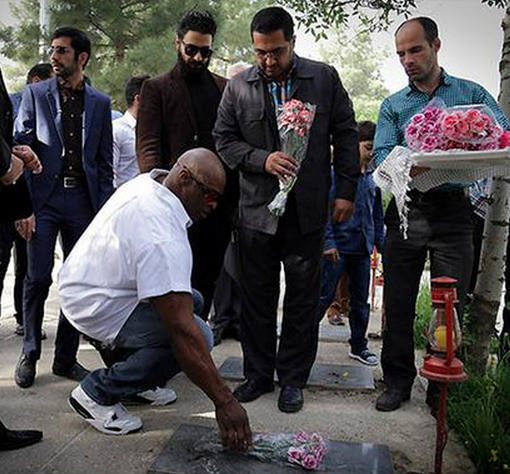 As soon as I heard Ronnie Coleman, the eight times Mr. Olympia bodybuilding champion, was going to Iran to promote his training methods and products, I knew it was going to be a controversial visit and I Tweeted about his visit.

The first controversy that came about was when the Islamic Republic authorities learned that Ronnie Coleman's itinerary included a training seminar for a mixed audience of men and women. Heavens forbid for the Muslim women of Iran to gawk at a non-Muslim American man's herculean sinewy body!
IRGC affiliated website, Mashregh News, asked with disbelief "Does this muscle machine intend to pose for our women?".
So that was a definite no-no and the seminar was cancelled.

Next, a picture of Ronnie Coleman with a Syrian opposition flag wrapped around him hit the headlines. Coleman was accused of being a Jebhat Al-Nusra supporter. His Iranian trip sponsors claimed Ronnie Coleman was a typical American who had no idea where Iran or Middle East was [May be he should work as a Homeland security officer in a US airport] and was totally apolitical oblivious to what that flag represented.

To fully compensate the embarrassment of being perceived as a Jebhat Al-Nusra supporter, Ronnie Coleman was led to believe he was going to the Behehsht Zahra cemetery to pay homage to Iran's war martyrs. Except that the grave he was made to pay homage, was not an Iranian martyr who had fallen fighting Saddam's aggression against Iran, but in fact it was the grave of the Lebanese suicide bomber, Mustafa Mazeh, or better known as“the first martyr to die on a mission to kill Salman Rushdie in London".

Coleman even squatted by the grave and laid his finger on Mustafa Mazeh's grave stone, as if reading the Muslim prayers to bless the soul of the dead. In this case of course the dead person who was being blessed, was a suicide bomber who tried to kill a British author but accidentally blew himself up.

In a way all this reminds me of how the Islamic Republic out foxed Bill Clinton's secretary of state, Madeline Albright. Madeline Albright was perplexed as to why Iran does not want to normalise its relations with US. Albright was bending over backwards to do anything she could to bring her Iranian counterparts to like America. Albright was told that Iranians were still stewing over the US role in deposing the Iranian Prime Minister, Mohamad Mossadeq, in 1953, and if only the US apologised for their role, then all would be forgiven.

Of course no one in the US State Department's vast legion of wide-eyed gullible graduate bleeding hearts alerted Albright that. hang on a second, why are you apologising to the mullah regime?! the mullahs were the very ones who helped overthrow Mossadeq and they have no love for him,
Albright, unaware of the full story of the 1953 overthrow of Mossadeq, apologised publicly, unreservedly and officially, thinking that all would now be forgiven and both sides will kiss and make up.

Ronnie Coleman is just a body builder who probably has no idea where the Middle East or Iran is, as his Iran trip sponsors tried to  argue, and one would not expect him not to be out foxed by the Iranian authorities, but it seems successive US administrations are repeatedly outfoxed by the experienced clerics who rule Iran.