Press TV, as most people by now know, is the English speaking arm of the Islamic Republic's state TV broadcasting. On the surface therefore, it has to display all the pious religious credentials the Iranian state claims to safeguard. Male presenters don't wear Western ties that "resemble a Christian cross" and female presenters of course have to adhere to the strict Islamic dress code.

The sudden resignation by a Press TV female news anchor, Sheena Shirani, before the weekend and her revelations of how she was under constant harassment by her news director and other male bosses in Press TV, is a manifestation of the old proverb, "The pot calling the kettle black" or to be more PC, "the skunk calling the rose stinky".

Former Press TV news anchor, Sheena Shirani's revelations prove that the underlying reason for the Iranian state media's obsession with accusing all others of having illicit sexual relations behind the scenes, is in fact a deep rooted frustration within the sexually repressed mentality of the Islamic Republic media's own senior male managers.

Sheena Shirani's revelations about the widespread sexual harassment in Press TV, started with her bombshell Facebook status when she announced she had left Press TV:

Soon after the above Facebook status, she posted a 10 minute recorded telephone conversation with her news director, Hamid Reza Emadi, when he demanded from her to ejaculate him in return for all the 'favours' he had done for her in the past.

In the recoded conversation, Emadi tells his news anchor that her breasts drive him crazy. Then he begs her to do him a favour several times. The favour he was asking for turns out to be that she should make him feel better by helping him ejaculate. Emadi then carries on saying his balls have been aching for her since the previous night and despite Sheena's objections that she doesn't want to know about such things, Emadi, the Press TV news director, persists that she is indebted to him and so she should help him ejaculate. Despite Sheena's objections that she can not do such things, Emadi presses on saying "You can do a lot more for me, you can have sex with me... " Sheena tells Emadi he should ask his wife to do these things for him, but Emadi replies "If my wife could please me, why would I come after you?".

The conversation then briefly turns into English. Emadi asks her in English "Why do you hate me so much?" and Sheena answers back in English saying "Why do I hate you so much? You make me hate you! What you are doing is hurting me". Then they revert to talking in Persian again and Sheena says "He is sexually harassing her", Emadi however has a different interpretation of sexual harassment and says "I don't harass you, its just that sometimes I feel frustrated and I call you because you are my friend".

Sheena sounding totally stressed replies "Just because I am polite to you it doesn't mean you should expect such things from me. I don't want to have a relationship with you other than a working relationship".
Emadi again ignores her and insists how much he has stuck up for her in the past and its now her turn to help him. Sheena's answer once again is "It doesn't mean I should sexually please you, I can not do it".
Emadi then refers to another colleague at Press TV, "You know how much I stood up for you against that beastly man, Afshar" Sheena snaps back "Afshar is another lech like you. You know all about him. I really don't want to talk anymore".

Emadi again ignores Sheena and seems to have the delusion that he can turn her on by saying "I am lying completely naked in bed now, you have a very sexy body, you don't realise it yourself. That husband of yours who left you must have been a complete idiot. You are super sexy. I am not the only one saying this. You are just unaware of the treasure you possess. Even despite those awful clothes they make you wear, even when you are wearing those clothes, you drive me crazy. Your body drives me crazy. I do my best to stop myself from the way I feel about you, everyone else feels the same about you. Even when you walk its as if you are offering sex, you don't realise yourself, you are super hot! Will you help me ejaculate?"
Sheena again protests and Emadi clutching at the last straws makes the 'shocking' admission that he is sexually hyperactive and needs help!
Sheena asks him "Is that my fault?" and Emadi quickly replies "Yes it is your fault, because you have such beautiful tits and such sexy lips. You have destroyed me with your breasts. Just give me 2 minutes of your time and make me ejaculate!"
Sheena's last words are "I can't. Bye" before she puts the phone down.

Sheena has also posted the unwanted flirtatious text messages her news director used to send her: 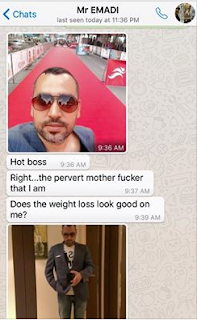 There is also a 30 minute video of Sheena speaking on camera, which reveals the extent of sexual harassment faced by female employees working at Press TV.

Interestingly also, Hamid Reza Emadi, is none other than the man who directed the forced confessions of the former jailed Newsweek correspondent in Iran, Maziar Bahari , which Press TV then aired as if it was a normal interview made without duress and Ofcom repeatedly tried to ignore as a gross violation of its rules, so as not to upset the ruling regime in Iran.

So there you have it, despite all the veneers of piety and reverence for Islamic morals, and all the false accusations against others, once again it seems as the famous Iranian poet, Hafiz, so pertinently put it seven centuries ago:

On the pulpit, preachers, pour out their pious display
Yet in private, they behave in a different way
I have a question to ask of the learned in our midst
Why Confession-Priests, make their own repentance delay.