When the US female chess champion, Nazi Paikidze-Barnes, and some of the world's other top female chess players announced last week, they will boycott the next world chess championships in Iran, because they have been told they are expected to wear the compulsory headscarves in Iran; it was a truly welcome news for Iran's women who have been fighting against the compulsory hejab forced upon them since shortly after the victory of the 1979 Islamic revolution in Iran.

Iranian women have seen very little international support in their long courageous fight against not having the right to wear what they choose.

Western feminist activists who are quick to march, demonstrate and publicly express their support for Muslim women to have the choice to wear the repressive burkas & neghabs in the West, have so far largely ignored the struggle of Iranian women to have the right to choose what they want to wear.

But cowardice, hypocrisy and silence of the Western feminists to one side, the Guardian's attempt to turn the chess boycott into an action against the women of Iran was truly despicable.

Islamic Republic of Iran's own man in the Guardian, Saeed Kamali-Dehghan, the former employee of the IRGC affiliated Fars News Agency in Iran, did his best to hand pick the women inside Iran to speak out against the boycott in his article.

Kamali-Dehghan spoke to Mitra Hejazipour, ranked 40th amongst the women chess players in Iran and 2357th in the world ranking, he quoted her as saying
"It’s not right to call for a boycott. These games are important for women in Iran."

One can understand that Mitra Hejazipour wants to play chess with her Western counterparts and to do this she has to accept wearing the compulsory hejab, she may even wear the hejab of her own free choice and due to her religious convictions, but no one has the right to tell other women to accept the compulsory dress code that to many Iranian women is a manifestation of the repression against them. A repressive symbol which they have been fighting against on a daily basis with the Islamic Republic's "morality police".

On the very day that the international female chess players will take part in the tournament, the morality police will be confronting thousands of Iranian women in the streets and even detain and/or fine them, for no other reason that they have not fully observed the compulsory Islamic dress code.

According to the official figures from Iran's interior ministry, in the first two years of Rouhani's presidency, three million judiciary files have been filed against women who have not fully observed their hejab code.

So far in this current Iranian year, between March to September, 40,000 vehicles have been impounded just in the Iranian capital city, Tehran,  because the female drivers or passengers were deemed not to be observing their obligatory Islamic dress code properly.

How can newspapers like the Guardian and the Western feminist activists be indifferent to these figures and at the same time expect non-Iranian women chess players to submit to the compulsory Islamic dress code too?

Saeed Kamali-Dehghan has further quoted Mitra Hejazipour as saying
"its an opportunity for us [women of Iran] to show our strength".

Saeed Kamali-Dehghan also quotes Ghonche Ghavami as saying
“The world must hear the pro-reform voices of people inside Iran and not ignore these pleas by isolating the country.”

Ghoncheh Ghavami is a UK-Iranian dual national graduate from SOAS university in London.  She left UK to live with her family in Iran after suffering some emotional problems. In UK, she was very active and vocal against the Iranian regime and participated in many demonstrations without wearing the headscarf. She was arrested in Iran after attempting to enter the volleyball stadium in 2014 with other Iranian female activists. Although others were released the next day, Ghoncheh was further detained and later sentenced to imprisonment after some alleged evidence was discovered on her mobile phone that was said to endanger Iran's national security. Since her release, she has been under pressure to back the Rouhani administration and say the "right" things in favour of the situation in Iran, so that it may lead to the lifting of her ban to leave Iran. For Saeed Kamali Dehghan to purposely select someone like Ghoncheh under such constraints for a quote in his article is not just bad judgement, its suspicious to say the least

Hanieh Farshi, a former imprisoned female blogger in Iran, reacted to the Guardian article and the way the Iranian women were selected by Saeed Kamali-Dehghan, by posting this on her Facebook today:
"
I have been jailed, I have paid the price, why doesn't a newspaper like the Guardian ever talk to someone like me and hear how we have suffered from the effects of the boycott of female sports by the Islamic Republic itself? For years we can't watch female sports on state TV, for years women's swimming has been excluded from the list of world sports, and then they tell us the Hejab issue is not important?! Who says it is not important? Is it not important for them [The Guardian] that for 38 years we have had to exercise our natural right [freedom of choice in what to wear] in secrecy and in hiding?"

Despite all of Saeed Kamali-Dehghan's attempts to turn the tables against the female chess players who called for a boycott, most fair and decent people should see that the likes of Nazi Paikidze are only defending their own dignity and integrity by expressing solidarity with the repressed women of Iran.

Islamic Republic of Iran is the only country in the world which forces compulsory hejab throughout the country and also forces non-Muslim foreign visitors to comply too.

One last word, those of us who remember the apartheid years in South Africa, will recall similar arguments that Saeed Kamali-Dehghan has posed in his disgraceful article in the Guardian. During the apartheid years, calls by the anti-apartheid movement in the West to boycott sports matches played against South Africa were always confronted by the right-wing pro-South African regime's lobbyists as leading to isolation and having a detrimental affect on the black players themselves. We were always told by the western leaders keen on doing business with the apartheid regime that boycott of South Africa hurt the blacks most and yet the leaders of the anti-apartheid movement inside the country always told us otherwise.

Curiously, when it comes to the Islamic Republic of Iran's apartheid against women, the Left in the West suddenly resort to those same arguments used by the pro-apartheid lobbyists. 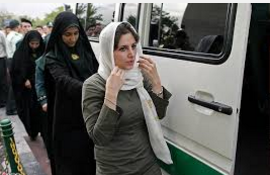 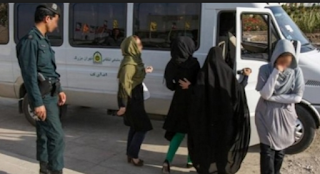 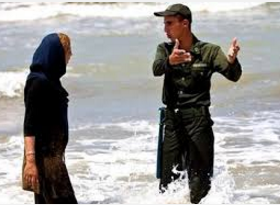 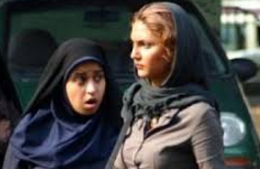