Twitter Bans Me Again! - The Utter Hypocrisy of the BigTech Thought Police

Twitter has banned me once again. This time for calling a Leftwing activist (@djuk2k) - an "inherent racist"! He had assumed I don't understand English because of my foreign name! Of course the Left can label you all sorts of things and right now the Bigtech companies, like Twitter and Facebook, let them get away with it. Well in fact they encourage and support them.

Even worse still, I have reported tweets which have threatened my family members, some even said they were going to rape my wife and my sister.  Twitter however responded "We have considered your report carefully and have found no violation of our rules and regulations"! See below: 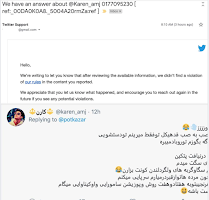 So to summarise, the Twitter Thought Police bans me for calling someone a racist but allows someone to threaten to rape and kill my family members!

When is this Bigtech censorship and hypocrisy going to stop? When will our elected representatives pick up the courage to properly regulate these user content generated social media platforms that are getting too powerful and are undermining our fundamental rights of free speech?

The twitter account for the Left wing activist who reported me is @djuk2k, He claims to be Darren Jackson from Manchester. He can't debate so he tries to ban people's right to express themselves. with the help of his BigTech Thought Police. 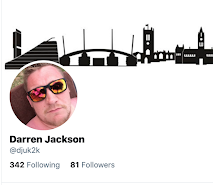 At at time when the people in Iran are struggling to be heard and their protests are being brutally suppressed, the likes of Darren Jackson - @djuk2k - from Manchester and his followers are more than happy to help the Ayatollahs in Iran by silencing the likes of me.

And here is another previous ridiculous Twitter ban I faced. I posted a tweet which just said "Twitter allows this?" I was referring to a tweet by an American "comedian" showing a severed head of Donald Trump drenched in blood, and Jack Dorsey's Thought Police banned me! 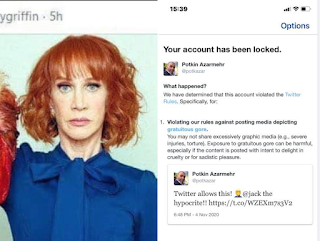 Sickening! But on a positive note if they’ve banned you again you’re obviously doing something right! Time to migrate to a more progressive platform?

Despicable move from twitter. Sad day when freedom of speech applies only to those who's ideology aligns with the platform.