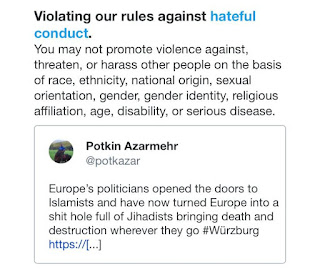 When I left Iran for good, I was under the impression that I will now be able to speak out against political Islam extremism without any fear for the consequences of what I say.
For many years that was the case. It is how this blog was started and it was an exhilarating feeling that I could be the voice of many victims of political Islam without fearing for what will happen as a result of what I say.

Things are changing however. A generation of indoctrinated youngsters in the West with no life experience and understanding of Islamic extremism, have been employed by the major social media platforms like Facebook and Twitter, to monitor free speech. A task they do assiduously but inconsistently when they decide what they ban and there is no independent body to monitor these Gestapo pretenders.

I posted the tweet after the Würzburg knife attack that led to the murder and serious injuries of several innocent people. An unprovoked attack by an Islamist "knifeman on a personal jihad" who killed an 82 year old pensioner and a 24 year old mother who was murdered by him while she tried to protect her young daughter. The attacker shouted “Allahu akbar. I realised my personal jihad,” after he was shot and arrested by the German police.

Any fair person can see that my tweet was in no way promoting violence against anyone. I was merely criticising the European politicians who have neglected the proper vetting of who can settle in Europe. Those politicians in my view have let down their own citizens. I was always taught, actions have consequences. Many innocent people have been killed because the European politicians have neglected their duty to protect their own people, but they are facing no consequences for their neglects.

The tweet that criticised the EU politicians led the Twitter Thought Police, which remind me of Iran's Minister of "Guidance",  to ban me permanently from tweeting. In doing so, they can take pride in banning a dissident voice against the Islamic Republic of Iran while all the repressive figures of the regime continue to spread their disinformation and their tweets of hate and poisoned ideology unhindered.

I have come to learn that behind every cloud there is a silver lining. My ban from Twitter and Facebook does not diminish my arguments against political Islam nor my warnings about the unholy alliance between the Left and the Islamists, it is a further proof of what I have been saying about the social media's control of narratives. My ban has proved that Twitter and Facebook exercise thought control in favour of the extremists and murderers.
It has also been a real opportunity to see who stands by me when I need their support. It is always good to be reminded who is a true friend: [see links below]
I thank all those who did not fear Twitter's thought police and tweeted in my support. Anyone who wants to follow me can subscribe to my Telegram App channel: https://t.me/SledgeHammerNews where there is still no Thought Police.
https://twitter.com/DaliaAlAqidi/status/1409251849580990469 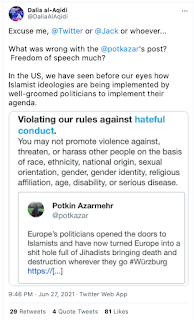 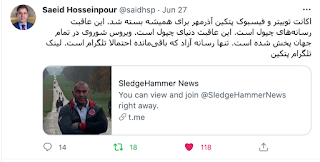 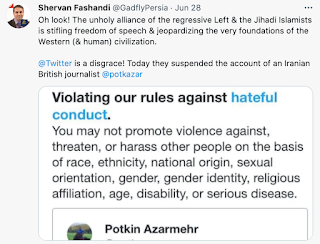 First, I recommend you appeal Twitter's decision. and explain what you mean. Then also recommend you to be more diplomatic. and you know in Europe it is called radical or radical Islamists. and you can not say shit hole because then you sound like Donald Trump 😀. and you can not suggest most Muslims would be in a certain way it is not allowed
anders.ljungberg100@gmail.com

I have appealed 3 times and been rejected