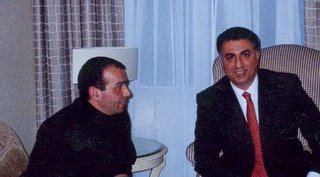 I grew up in a family who were opposed to the Shah. My father, I am told, spent a total span of 6 months in prison during his student years. My maternal uncle, who had distinguishing red hair, was always identified easily in political protests because of his unusual hair colour amongst Iranians. At the end, he was arrested so many times, he had to flee the country and start a new life in the West. We had childhood friends whose fathers had been executed and despite having no blood relationship, referred to my parents as aunt and uncle.

After my father became a parent, he had already stopped all political activity, but still on a couple of occasions, he was taken from home for questioning by SAVAK secret police. No harm was done to him and he returned safely on each occasion, but still the images of not knowing why he had to suddenly leave home and a worried mother who was trying to pretend to us there was nothing wrong, while uncontrollably shaking like a leaf, are not comfortable childhood memories to remember.

I remember vividly when the Shah suddenly decreed the creation of a one party state on state TV, and how he condescendingly said "anyone who doesn't like it can ask for his passport and leave the country". I only remember my father shed tears in front of us on a handful of occasions, and that was one of them. He looked straight at the TV screen as if talking directly to the Shah, and said "I love my country, why should I leave it just because I oppose you?"

So when I first met Reza Pahlavi in London, it was with such a background and outlook that was engrained in me.

When he walked in the room and shook hands with us, his charisma was unmistakeable. Naturally he had the celebrity status. I had only ever seen Reza Pahlavi as the Prince of the realm on TV as a child, usually during popmpous ceremonies or sporting occasions. Meeting him in person was as remote as you can imagine. Yet here I was in a room face to face with the Prince and he was calling me by my first name. But such encounters may be usual when one meets anyone famous, and the initial awe gradually fades away. What was impressive about the rest of the meeting was that what Reza Pahlavi said, made sense. I soon found him to be a level headed guy, without any hang ups about the past but focused on the future of Iran. Most importantly he was nothing like the usual run of the mill, out of touch with reality, monarchists I had often met.

I then saw Reza Pahlavi at Chatham house. During the questions and answers, a girl stood up, introducing herself and her family members, claiming they were the first Iranians to raise the flag of monarchy in Hyde Park. She was obviously fishing for compliments. I dropped my head in despair, but it quickly bounced back up when Reza Pahlavi interrupted her, not only not complimenting her but saying "that was your first mistake, rather than raising the flag of monarchy, you should have raised the flag of Iran. I want Iranians to say they are freedom fighters first and foremost before saying they are monarchists, next question please".

The attitude he displayed against the old hat sycophant monarchists made me like Reza Pahlavi even more. This is actually one of Reza Pahlavi's traits. You will not impress him by saying there was nothing wrong during his father's reign or showering him with empty phrases of adulation, you will impress him however with a sound sensible argument.

I have met Reza Pahlavi on many occasions now, haven't always agreed with him, but I think I am in a good position to make better judgement on him than most people. Reza Pahlavi is a modern Prince, who is passionate about the liberation of Iran. He genuinely believes if monarchy is to play a role in the future of Iran, it has to be similar to that of European constitutional monarchies. If I can sum it up, I see him as the equivalent of King Juan Carlos of Spain for Iran. Something I find quite appealing amongst the few alternatives we have in front of us. A stabilising figurehead and a symbol of unity, who can inspire the citizens above the partisan politics. After all I saw for myself how he changed the feeling of depression and hopelessness amongst Iranian refugees and asylum seekers in an unannounced Nowrooz (Iranian New Year) visit.

So to those who still have a hang up of the past, I say, GET OVER IT, whats in the past, is in the past. No one wants to, nor is it possible to restore the way things were under the Shah. Unlike most of us who have shared responsibility of what went wrong in the past, Reza Pahlavi is not repsonsible for any of the past mistakes. Lets focus on the future as Reza Pahlavi does.

Even if a similar model to the Spanish monarchy for Iran does not appeal to you, then fine, work on your heartfelt desired paradigms, but do not have any misguided illusions about Reza Pahlavi and what he stands for: A patriot who is in touch with reality and an important player who strives for a modern democratic pluralistic secular Iran.

So, basically you are just a shill for the Pahlavi dynasty.

Basically you are a complete idiot who prefer to remain anonymous