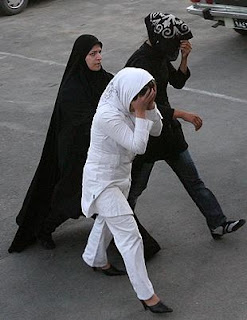 What distinguishes Islamic Republic of Iran from other dictatorships is that not only the political decision making process is restricted to a few (known in Iran as khodihaa), but that the state also interferes in the non-political aspects of its citizens' personal lives.

Pictures below show the latest round of state crackdown on women who have not fully observed their Islamic dress code. The way Iranian women push back their scarves and cheekily show their hair is often praised by Islamic Republic apologists as how "liberal" Islamic Republic is. They conveniently forget that it never used to be like this in Iran before 1979. 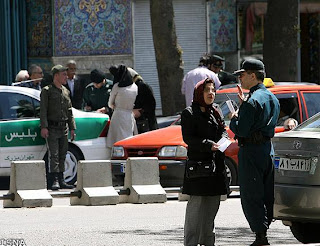 Here is also a film footage of the arrest of Iranian football player Mehrdad Minavand:
http://www.littlepersia.se/clips/p-MehrdadMinavandArrested.html

Any where else what he is doing would be regarded as having a few drinks with friends, but in the Islamic Republic it is considered a crime.

"It looks like everyone is loyal and the regime will be here for centuries, that nothing will ever change, and its easy to believe that. " At some moment, though, the regime's invencibility facade cracks, people gain confidence that they can change things and soon it is all over. "Without anybody organizing a demonstration, the passersby had turned into demonstrators " - Vaclav Havel
Posted by Azarmehr at 1:57 AM

To find out how Iranian women looked before 1979 and imposition of sharia laws click here.

very nice article,keep reading your articles, i found them very interesting.
very glad to hear that you like vaclav havels opinions

very nice article, i found the most of your articles very interesting. glad you to hear you like vaclav havel as well.
prague reader

very good article, as the most of your articles. glad to hear you like v.havels ideas
prague reader

very good article, as the most of your articles. glad to hear you like v.havel ideas
prague reader

it is one of the many crimes of the IRI

A minor point perhaps, and with all due respect, I don't believe in the use of Islamic Republic of "Iran". Although it is the ridiculous 'official' name and Islamic Republic is the government in "Iran", the term is a misnomer as it doesn't represent the majority of the People in sham elections. See my post:
http://plateauofiran.blogspot.com/2007/04/mainstream-media-islamists.html

Thank you Prague Reader. Vaclav for me is a true symbol of a free thinker, who did not let power go into his head.

It is better for these women to be warned now than to die in the burning flames of hell later for their sins. If they knew what punishment lie ahead for their disregard of hijab, they would thank the people who are admonishing them. Allah is all merciful, he is warning them before its too late.

I feel very sorry for these women.

As you well know, Iran has the dual whammy of being not only a dictatorship, but a religious dictatorship. So people's private lives are invaded more than any other dictatorship.

When are you people going to wake up that you are living in the 20th century?? You have no freedom of choice in anything and that the 51th century is long gone !!thats why they keep you from the outside world ,to keep you as dumb as they are ,marriage to a 9yr old child is nothing short of discusting are you so brainwashed that you cannot see this ??do you have no decency at all???wake up and smell the roses before you all end up dead from these fanatics !!