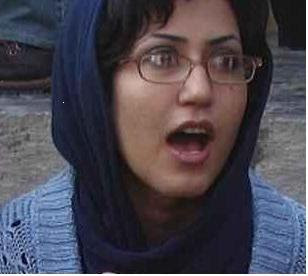 The NUS (National Union of Students) conference in Blackpool, UK, has elected Anoosheh Azadbar to become the honorary Vice President of the UK's Student Union, in order to show solidarity with Iran's students.

Anoosheh was amongst the many Iranian students who were arrested or kidnapped on 7th December, for trying to organise student protests to mark the Student Day in Iran.

Anoosheh was nominated by students from 28 of UK's universities and colleges. Anoosheh is now the third Iranian pro-democracy activist who has been elected as the honorary Vice President of the NUS. Previous Iranians elected to this post have been Ahmad Batebi and Mansoor Osanlou.

Amongst the past non-Iranian honorary NUS VPs are the likes of Nelson Mandela, Tasleema Nasrin and Yanar Mohammad.
Posted by Azarmehr at 3:06 PM