Was this the Woman Behind Today's Islamic Fundementalism? 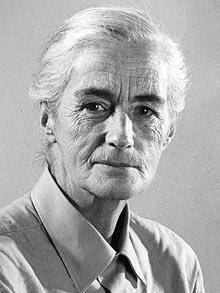 Unfortunately I have never had time to read any of AKS Lambton's works about Iran and I was under the impression that she must have passed away some time ago. In fact AKS Lambton died only last month at the age of 96.

Anyone who has read about Iran's recent history, however, would have surely come across Miss Lambton's name. Her detailed knowledge of Iran, written in her numerous research papers, is often admired by those writing about Iran's history in the 20th century.

Her death in July this year, has prompted many Iranians, like Amir Taheri, who knew her personally, to write about her. According to Amir Taheri, AKS Lambton, considered Iranians as either illiterate peasants or a minority of affluent intellectuals with little social conscience or regard for their country. She was some one who looked down on Iranians and claimed that Iranians, were like minors who needed looking after.

Miss. Lambton's official position between 1939-1946 was Britain's press attache in Iran, although this must have been a front for her other secret activities, for Iran only had 4 official newspapers at the time and so the British embassy hardly required a dedicated position for a press attache.

Amir Taheri points out Miss Lambton was the mastermind behind the accusations and the fabrication of lies made by the BBC between 1941-2 about Reza Shah, the founder of the Pahlavi dynasty, which portrayed him as a corrupt and greedy pro-Nazi monarch as well as instructing the BBC to say that the exiled Shah stole Iran's crown jewels and assets just before he was forced into exile by the British. Later in 1941, when Foroughi, Iran's Prime Minister after Reza Shah, asked Britain for the return of these alleged stolen assets, the British Embassy in Tehran said " These were only necessary propaganda at the time".

Miss Lambton herself a staunch Christian who was awarded the Cross of St. Augustine by the Archbishop of Canterbury for her services to the Church of England and Christianity, saw religion as the best way to combat the rise of Communism. According to Amir Taheri and others, she was the brains behind the formation of political Islam as the most reliable and effective force to stand up to the spread of Communism in the region. In fact Ayatollah Khomeini's first riots against the Shah's land reforms, women's rights to vote and religious minorities having the right to swear on their own holy books etc. erupted two years after Miss Lambton's work on how the British could use political Islam for furthering their interests.

Miss Lambton was in constant contact with the anti-Shah opposition groups giving them guidance throughout her political career. Amongst the many revolutionaries who in 1979,
became the leaders of the Islamic revolution that she was in direct contact with, were Ayatollah Beheshti, Ayatollah Mottahari, Ayatollah Baahonar, Ayatollah Mofatteh and even Khomeini's first appointed Prime Minister, in the post revolutionary provisional government, Mehdi Bazargan.

According to Taheri, the secret documents relating to Miss Lambton's work in Iran will not be declassified for 75 years instead of the customary 30 years for such documents. So perhaps only the next generation will know for sure whether this British agent in Iran was responsible for the rise of the Ayatollahs to power and an ideology which has terrorised the region and beyond ever since.
Posted by Azarmehr at 9:57 AM

fascinating but not at all surprising. It seems that Daie Jan Napoleon was not deluded after all!!

even the two universities associated with her, soas and durham are the most active centres for the embassy of Islamic Republic.

Thank you dear Potkin.
Excellent article.
Is there a link to Mr. Taheri's article or are you quoting him from his conversations with you?
I have posted this article on Searchles.

So he wasn't greedy? He didn't become the richest man in Iran owning over 3000 villages? see my blog entry on it.

I read Taheri's article in Persian in London based Kayhan weekly. Sadly I have not found an English translation of it.

You know nothing about Reza Shah,other than the crap fed to you by the likes of your SWP associate Elaheh Rostami.

If you read my blog you'll find that none of the sources come from the SWP.

Monarchs tend to be rich people exploiters of the people. It is a general trend over the last, ooh I don't know, 4000 years...

Your post is so crap, so wrong, I dont even knwo where to begin from, do you even know who Davar or Teymourtash were? I ask because you call them 'political leaders'! Did you know they were both part of Reza Sha's government?
Did you know Teymourtash was tried for embezzlement and sent to prison?
Did you know how Davar was killed and how loyal he was to Reza Shah?

And did you ever ask yourself who Reza Shah took the "3000 villages" from? Did you ever consider that they may have been fat cat Qajar landowners who left their land and their serfs to rot and what happened to these villages and how they propered after?

After Reza Shah's coup against the incompetent Qajar dynasty who brought ruin to Iran, Mossadegh took several minsitry posts, including treasury and judiciary and became the foreign minister too.

Reza Shah wanted to declare a Republic but the mullahs refused and insisted that Iran should be ruled by a monarchy. The Parliament voted for the overthrow of the Qajar dynasty and the new Pahlavi dynasty. Mossadegh, himself a Qajar prince, was against this and from that point on did not take on any public posts and tended to his personal fortune and running of his own land/village. This "brutal" monarch that you and your comrades want to portray him as left alone a Qajar prince who was publicly against the overthrow of Qajar dynasty. What would Stalin have done in a similar situation?

When was Molière banned in Iran? This is so much nonsense because I remember reading Molière's Miser in our school text book!

When was Shakespeare banned??

Your whole comparison with the past is school boysih,wrong an dnon-scientific. Have you ever compared figures under Pahlavis with that of Qajar and see where Iran started from and what the trend was?

Before the Pahlavis, Iran had no middle class, during the Pahlavis Iran's middle class flourished and boomed. IN fact Iran's population was declining due to famine and disease, but soon after Reza Shah took over and modernised Iran, Iran's population started to grow for the first time in decades. We had nothing under the Qajars, no engineers, no national schools, no universities, no army, not even text books, no judiciary, no railway, nothing. Every thing had to be built from scratch.

What conclusions would you come to if you compared such figures in the Persian Gulf countries with that of 30 years ago? How would the trends compare you imbecile??

Do you seriously believe there were 100,000 political prisoners under the Shah? So when they were released in 1979 where were the 100000? Why don't you see the conclusions of the Martyr Foundation itself:
http://www.emadbaghi.com/en/archives/000592.php
you stupid demented idiot? It is in English and I have asked you several times to read it.

You take up a lot of my valuable time, something I really don;t have for a biased brainwashed idiot like you who only reads one version of history.