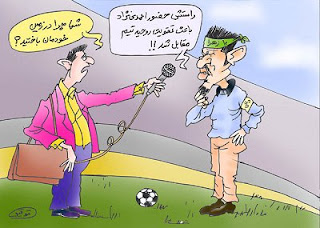 The SMS messages sent in Iran these days refer to him as Mahmood13.

Surely you can not blame the defeat on Ahmadinejad! How can a president be responsible for a football match? I think you are so desperate to criticise the regime that you grab at any thing.

I think anonymous has a point. But on a lighter note, Ali Daei had to go. His petty coaching style is what has kept Mobali from playing on the national team, and that's simply not acceptable. Not to mention his associations with politics and political figures.

And as far as Ahmadinejad firing Daei; God damn it! Do they not understand that FIFA has rules against that? THE GOVERNMENT CANNOT BE INVOLVED IN SPORTS MANAGING DECISIONS. It's because of things like this that Iran is never on the FIFA soccer video games, but motha fu*%in Uzbekistan is. We Iranians living over seas have been deprived of playing with our own team from Sega to Play Station 3. And jenab agha Ahmadinejad is not helping.

Ali Daei is at the service of the regime. I never liked him. We have a word for this type of person: Chaplous چاپلوس ، بادمجان دور قاب چین

my friend you are missing the point.

No one is blaming the loss of the Iranian team of Ahmadinejad here. He is simply showing how the people of Iran simply have no respect for him, or the regime.

This is how the Bedouin Arabs interpretted the win:

Any chance of replying to my reply to your comment:
http://azarmehr.blogspot.com/2009/03/omid-mir-sayafi-another-death-at-evin.html

Azarmehr, on my mother I responded, and it was quite long, but it wasn't published. I'm not saying you didn't publish it, I think the same thing happened as before. I think it has to do with the computer I post from or something, because every time I post from that cpu it never gets published and I have to end up rewriting it. And honestly, I haven't mustered the energy to rewrite it all. But i will, give me some time.

Try to copy/save the comments so you can paste them again. Perhaps when the comments are too long this happens?