This is just the sort of thing Iran's Green Movement needed. Tens of thousands of Italians marked 25th April, the anniversary of the end of Mussolini by wearing Green T-Shirts with maps of Iran printed on them and expressed their solidarity with the people of Iran who seek freedom and justice against the tyranny of Ahmadinejad's messianic military junta. The T-shirts also had 'From Tehran to Turin' printed on them. 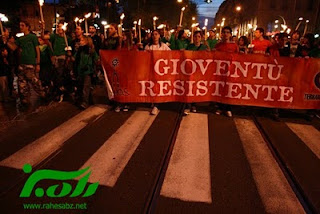 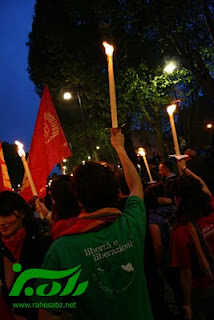 Thats realy cool. Thanks to Italians!

Well done Italians, and thank you.

Viva Italia! I just wish my own country of England was more vocal in their support of proper Iranian democracy and freedom! Cromwell stood up to a similiar situation against the tyranny of Royalists centuries ago in England. Of course I'm not saying he was perfect - he wasn't! Also driven by religion! But at least in an historical context, he was a face that changed the political system that gave more power to the people. Unfortunately Mousavi is still part of the old guard that works within the clerical system. On that count, he can only ever be a Gorbachev that acts as a stepping stone to an eventual Iranian Yeltsin. OK, Yeltsin wasn't perfect either! But at least the transition to a Yelstin style coup, is probably more preferable to a Cromwell civil war that spills the blood of innocent Iranian's. Although if I'm honest, I would just love to see millions upon millions of Iranian's march right up to Khanmanei's sick throne and scare the shit out of him to make the changes the people demand!