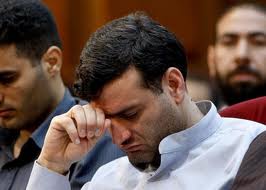 Abdulla Momeni's brother was martyred in the war against Saddam. He voluntarily returned to the front after he recovered from an injury. As well as his own children, Abdullah also looked after his martyred brother's daughter.
Posted by Azarmehr at 4:16 AM

Supreme Tyrant just about sums it up...

The Regime is slowly being closed in from all corners - Cracks from within - Even the odd pang of objective conscience slipping through on PreesTV's comment pages to test the propaganda bariers.

And yet the the Khamanei's regime still prevails. Still stands to make a smug evil mockery of democracy...

It is said Iranian's march better on full stomach's rather than empty ones. Maybe that philosophy now needs to be changed---:

'Iranian's march better on a full conscience rather than letting it be drained by tyrants!'

Standing by and waiting to see what happens in Syria won't help freedom loving Syrain's. But maybe raising up against Khamanei's support of Assad will! And in the process leave the Supreme tyrant of Iran nowhere to run!!!

Ultimately the choice between freedom and continued oppression is in Iranian hands.

But sadly, thus far, the gun-running despots of Khamanei - Nasrallah and Assad remain on top!

All the time the Iranian people stay silent they make a joke of you!

So why assist a saboteur of democracy from other countries too by playing the waiting game in the forlorn hope that things might change for the better???

Maybe Al Quds is a good rallying call to demand ABSOLUTE LIBERTY for the Iranian people too!