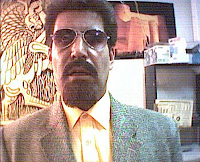 I don't have any information about Iran's nuclear plants other than what is in the public domain and I would have no way of verifying if an explosion occurred inside a nuclear plant in Iran, unless tangible reports such as radioactivity being reported by experts or official statements and witness reports suggest so. What I do have however, is extensive experience of bullshitters and I am usually pretty quick at detecting there is some BS in the air, when it comes to Iran related news on both sides.

That is why when I read the Spiegel report about an explosion at Fordo nuclear plant near the holy city of Qom, I did not need to google for geiger counter readings of Qom, I could tell straight away that Spiegel had fallen hook, line and sinker, since its only source for the explosion story were two publicity seeking untrustworthy individuals Hamid Reza Zakeri and Reza Khalili.

The former, I have known about since ten years ago. Hamid Reza Zakeri, claimed back then to have worked for Iranian intelligence and had fled Iran to Holland. There is nothing this man will not comment about or not know about. Whether it is about the murder of Zahra Kazemi in Evin prison or how IRGC will close the straits of Hormuz or inside an Iranian nuclear plant, Zakeri has been privy to them all and even after ten years, his "contacts inside the Iranian intelligence services" inform him of the lastest developments! Perhaps his contacts would do a more worthwhile job if they taught him not to make basic spelling mistakes when writing in Persian.

Even if someone has worked for Iranian intelligence, they would not be privy to everything but Zakeri with his basic literacy is never shy to be in the news and will make out he knows everything. Over the ten years, I have known about him, I have been studying his stories and seen his amateur forgeries of so-called top secret documents. 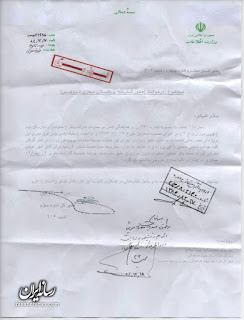 Here on the left, is one such amateur document he has produced in the past. The forgery is so bad, even an Iranian school boy would recognise it as a forgery, but his sponsors like Kenneth Timmerman, another dubious character, have no problems promoting him to the unknowing Western public and news channels that crave for titillating news.

Zakeri's predictions have also been no better than his forgeries. Ten years ago, he was a regular guest on many Iranian satellite channels in LA and he claimed he had been shown documents by the CIA and the Pentagon that the US will invade Iran within a maximum of six months. That was ten years ago!

The other Spiegel source, is Reza Khalili, who has written a book called, Time to Betray. The book has no significant information in it for an avid Iran watcher. Basically it is a collection of public domain facts and rumours in the 1980s Iran, told in a nice narrative format suitable for bedtime reading. Khalili has also come up with all sorts of claims that have been proven to be mere figments of his imagination, but whether it is an impending EMP attack on US by the Islamic Republic or an IRGC general who has been arrested for his support of the opposition, who later appears standing loyally next to the Supreme Leader, such news stories are always an opportunity to plug his book, Time to Betray.

In fact, if I had access to the sales figures of his book, I could have probably come up with a BI graph which showed every time the sales dipped, he came up with a new sensational news story!

Apart from my sceptism about the sources of the hoax in Spiegel, there is a matter of common sense and logic. How has Zakeri & Co. come up with an exact number of 240 personnel trapped inside the nuclear plant? The 240 personnel surely have families, but none have been vocal about the situation. The blast shook facilities within a three mile radius, highway was supposedly closed for hours and rescue workers have been working frantically, so even more people must know about something happening at Fordo, but they have only notified Zakeri and Khalili?

The explosion  is supposed to have taken place one day before the Israeli elections and was a joint Mossad operation, so surely the Israeli Prime Minister, Netanyahu must have sanctioned it and known about it and the news would have been a great boost to his poor election prospects, but strangely, no word.

LoL. You hit the nail on the head.