An Exceptional Act of Courage 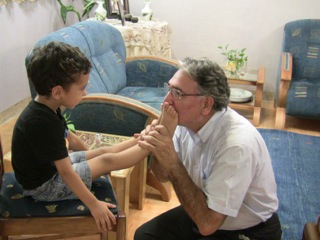 In the Islamic Apartheid Republic of Iran, all religious minorities have been made into second class citizens. Even Shiites who adhere to a different interpretation of the faith than the official state ideology have been victims. However, one can say without a shadow of doubt that the Iranian Bahaiis have sufferd the most and have been the biggest victims of this religious apartheid regime.

Iranian Bahaiis are stripped of all citizenship rights and are discriminated against in all walks of life. One of the most shameful discriminations against the Bahaiis in Iran has been to deny them the rights to higher education. Imagine what tumultuous uproar there would have been, if the Israelis denied their Arab citizens the right to higher education and yet there is such a disgraceful silence on the plight of Iranian Bahaiis by the so-called "progressive" forces in the West.

The parents of Artin, the little four year old boy in the picture, are in prison and Artin is being looked after by his grandmother. Artin's parents are not criminals however; Kamran Rahimian and Faran Hessami are Bahaiis who were teaching in an online university for Iranian Bahaiis who wanted to receive higher education. They have both been sentenced to four years in prison.

The man seen in the picture is Mohammad Nourizad. An Iranian filmmaker and a former journalist in the hardline Kayhan Daily printed in Iran. Nourizad was once an ally of the Supreme Leader but he broke ranks with the Supreme Leader in 2009. In an open letter to the Supreme Leader, Nourizad urged Ayatollah Khamenei to apologise to the nation for the bloody crackdown on the protesters.
"As commander in chief of the armed forces, you didn't treat people well after the election. Your agents opened fire, killed the people, beat them and destroyed and burnt their property. Your role in this can't be ignored, ... Your apology can cool down the wrath of the people."

Nourizad was sentenced to three and half years imprisonment for writing the letter. In prison he saw more wrongs that had been done to the nation. He met young talented people suffering imprisonment and ill treatment who would in any other normal country been regarded as the nation's assets and promoted. The prison made Nourizad even more resolute to make up for the times he had been on the wrong side.

Yesterday in an another exceptionally courageous act, Nourizad went to meet the little Artin and kissed the feet of the four year old and apologised as a Shiite Muslim for the injustice this innocent little boy was made to suffer. Considering the "Representatives of God on Earth", who rule Iran, regard the Bahaiis as "unclean", to do this in the holy month of Ramadan took exceptional courage.

Nourizad wrote on his Facebook page:
"Artin's innocent little eyes looked me in the eyes and asked me, 'You who consider yourself a Shiite, clean and Godly, was it not the prophet himself who said 'seek knowledge from cradle to grave?' So what was it that my parents did wrong? were they not merely teaching physics, chemistry and sciences? So why should they be in prison now and my grandmother have to look after me?'
"
Artin's grandfather was executed by the Islamic Republic many years ago.

And with Rouhani already reiterating the blood money and blood soaked ties of Assad, Nasrallah and Khamenei, the only real changes to the Iran's Islamic Gestapo is it's avuncular smirk.