I was following via twitter, the Europe-Iran Forum that was held in Grosvenor Square Hotel in London, over the last couple of days.

Although the claim was that the Forum intended to gain "practical insight from experts" and get "most relevant, up-to-date information from Iran and Europe", the tweets suggested most speakers were painting an unrealistic super rosey picture of the Islamic Republic.

Not once did I see a tweet about how the IRGC are putting a stranglehold on Iran's economy or the rampant corruption that has become so prevalent that it no longer surprises anyone, regardless of its astronomical magnitudes.

Nor did I see any tweets about leading businessmen in Iran frequently becoming escape goats for the country's malaise that so many of them have applied for St. Kitts & Nevis passports to safeguard them against a rainy day.

Nor was there anything about the endemic nepotism in Iran or the huge brain drain from the country or most important of all, the intrinsic animosity and suspiciousness by the Supreme Leader and the hardliners towards anything considered Western. At times it seemed the forum was about a different country altogether.

To cap this all, the selectiveness of the Forum organisers in which press organisations could attend the Forum did not help to inspire confidence. WSJ and TehranBureau for example were barred from attending the event, while Press TV, IRNA and IRIB [Iran state TV channels] were warmly welcomed to report from the conference.

But the one tweet I saw from Dina Esfandiary of IISS, made me laugh most: 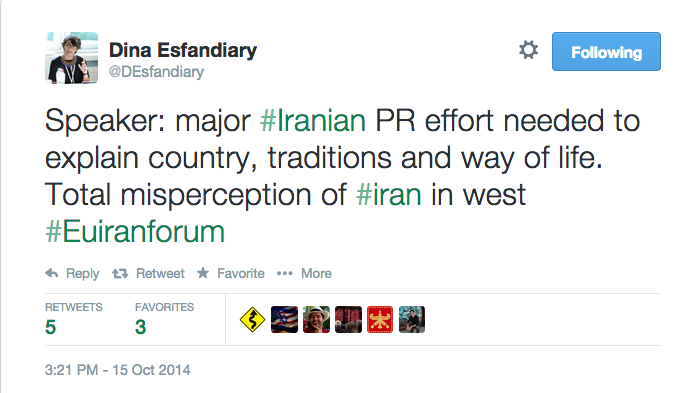 So its the lack of PR that's the problem?! How much more spin is needed by these network of lackeys and lobbyists to make a backward theocracy and a religious apartheid that is run by a mafia economy to look like a normal country?

At the same time that the forum was going on and the attendees were being dazzled with the bright horizons ahead, the British-Iranian Ghoncheh Ghavami who went back to Iran after voting for Rouhani and was arrested when trying to go and watch a volleyball match, was tried behind closed doors charged with "propaganda against the regime". Not once since her arrest, has she been able to see her lawyer. 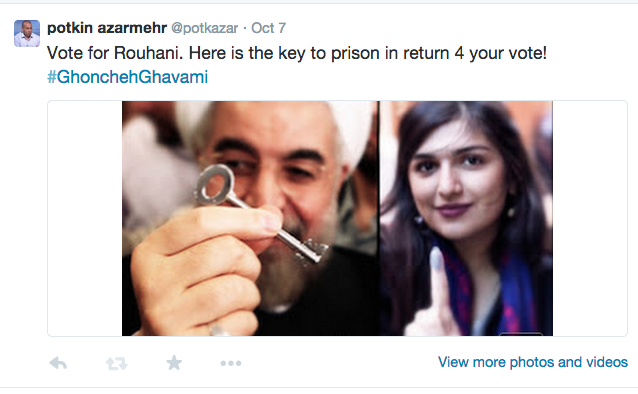