Ever since Ahmadi-Nejad became the president, we have feared a military attack on Iran as the worst option. Instead we have presented the pro-democracy movement in Iran as the most viable option to bring peace and stability to Iran, the region and to the world.

Sadly the Islamic Republic apologists, individuals like Ray Takyeh, Fareed Zakaria, Hossein Nasr, Laura Rozen etc. and organisations like CASMII, Iran Action, SWP etc. have consistently tried to diminish the strength of desire for change from the current theocracy to a secular democracy amongst the young dominant Iranian population and have tried to present the Islamic Republic as an acceptable form of government and even a 'shining beacon of democracy'. Their efforts with the help of funding they receive from the Islamic Republic petro-dollars and the misguided support of 'useful idiots' has meant that the pro-democracy movement in Iran has not been able to enjoy the support and the recognition it deserves and hence not count as a credible alternative to the ever increasing menace of the clerics ruling Iran.

Yet there now seems to be an even worse option on the table. Limited strikes on military and nuclear targets which will destroy much of Iran's infrastructure but keep the clerics in power!
In fact the Ayatollahs in Iran seem to be welcoming the limited strikes, and as always their biggest fear has been regime change from within.
Well for those who have consistently defended the Islamic Republic and turned a blind eye on the human rights abuses by the religious dictatorship in Iran, and repeatedly played down the potential of the pro-democracy movement in Iran, here are photos from the students at Alameh University today protesting against the arrests and expulsions of their student colleagues. The pro-democracy movement in Iran despite all the obstacles in its way is still alive and kicking, it just needs more help and publicity. 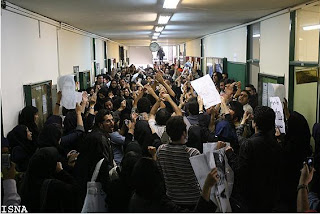 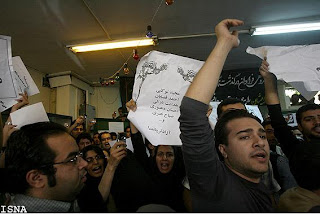 The Iranian regime agents you mentioned also want the US or Israel to attack Iran. It'll prolong their filthy lives for a short time...

How do limited strikes on the military and nuke facilities destroy much of Iran's infrastructure? The purpose would be to destroy as little of the infrastructure as possible. Who says it wouldn't include support for regime change also?

I don't like the thought of bombing Iran, but what if the people were warned in advance that should it come to that, it would be with the intention of getting rid of the regime so that Iranians could hold a referendum to choose their own type of gov't and have free elections?

Azarmehr -- what's your opinion on the sanctions on Iran? Do you think they can effect any positive changes for the people or Iran?

Or do you think the slightly longer-term proposal of more trade, but only with the private sector (as 80% of business of state-controlled) to less the control of the IR on the economy will effect more positive changes?

There will be no peace in the M.E. as long as Israel exists, don't fool yourselves!

Max I definitely think intelligent sanctions which target the regime should be pursued.
The more trade with private sector option does not appeal to me. Iran's economy is heavily controlled by the Foundations and the Revolutionary Guard, and very often when private sector is doing very well, it simply gets snatched by the regime. Examples in the private finance sector, when even the court orders did not prevent the take overs of the board by the government cronies.

Travel bans should be rigorously applied to the regime officials and all their supporters who have poured into Europe and US should be sent back to Iran.

If Islamic Republic is removed, it will cut off a huge portion of finance to the extremists, then may be reasonable people on both sides will prevail, and we will be able to be as optimistic as during the Oslo negotiations. But until states like the Islamic Republic are fueling and financing extremists for purely ideological reasons there is no chance in hell!

How will dropping the most powerful bombs on targets which are 'thought' to be underground nuclear facilities lead to a referendum??

I have heard a lot of times about super accurate missiles before wars but they never seem to work during the wars.

Azarmehr, you asked - how do dropping bombs lead to a referendum?
You skipped a sentence. It's not bombing alone. I said "it would be with the intention of getting rid of the regime so that Iranians could hold a referendum "

And I asked, how limited strikes on military targets destroy much of Iran's infrastructure? Your answer is that they aren't always accurate?

It is ridiculous to assume that a dozen students protesting in the university constitutes a pro-democracy movement. You will find those students are all pro-revolutionaries whose political views may differ in some respect to that of the government. Don't believe me? Move your butt and go and see.

You see Mehrangiz we all get our information from different sources and by different methods and we all think that our source is the most valid one to base our conclusions on.

I agree that the pro-democracy movement should be supported but bombing may be necessary anyways. It's a matter of time--the West should not wait forever for the pro-democracy movement to *eventually* overthrow the mullahs in 1000 years, 100 years or even 20 or 10 years. By that time, the fanatical mullahs may give a terrorist a nuke--the denotation of which may lead to WWIII and nuclear winter!

"the West should not wait forever for the pro-democracy movement "

And in fact the West has repeatedly supported the theocracy in Iran and sang the praises of the 'Islamic Democracy'!

As Bahramerad above says, why not just stop the lucrative trade with the mullahs?

Could the US and the West in general do more for the Iranian democracy movement? Yes, they could do much more!

But as bad as the Islamic Republic is, its destruction becomes Priority #2 compared to averting nuclear terrorism (especially on a scale that could destroy the world)! Which leads us back to time...if the democracy movement can shut down the nuclear threat before it goes from being potential to being real, then America and the West must support it 110%! But if the democracy movement can't end the threat in time, then their national interests and perhaps even the interests of the entire world require alternative action...

Well I would argue that until there is Islamic Republic with or without nuclear capability, terrorism and nuclear terrorism is a possibility. Even if they don't have nuclear weapons themselves, their brain washed disciples can sabotage nuclear installations elsewhere. Until there is a state that funds, recruits and propagates terrorism, it will remain a serious threat.
So the best way to avoid this scenario is to overthrow the Ayatollahs not to keep them in power.

I'm afraid I've shamelessly raided a few of your posts again. Thanks very much for bringing these things to wider attention.