As soon as you can see Norway's magnificent forests and lakes from your aeroplane window, you get a sense of a freshness and natural beauty. You won't be wrong either, it is a beautiful country, it is efficiently run and the only oil producing country which has not fallen victim to despotism, corruption and mass poverty. Norway is prosperous, its people are beautiful, hospitable, courteous and very civilised. This was my first visit to a Scandinavian country but I wasn't going there as a tourist. I was going to Oslo to be alongside the famous Iranian Human Rights Lawyer, Mohammad Mostafaei, in what turned out to be a roller coaster of emotional anxiety and waiting but fortunately a very happy ending.

Mostafaei got in trouble with the regime in Iran after he helped publicise the stoning case of Sakineh Mohammadi Ashtiani. Unable to get hold of Mostafaei, the Iranian intelligence ministry had resorted to the despicable act of taking his family members as hostages. Mostafaei's wife, his brother-in-law and even his elderly father-in-law were all taken into Evin prison. They were being held as hostages to get their hands on Mostafaei. The regime's desperate act of taking family members as hostages however, only exposed the backwardness and illegality of Ahmadinejad's administration. As someone once told me, Islamic Republic's worst enemy is itself. They accuse everyone who disagrees with them as 'threats to national security' but the real threat to national security is none other than their own backward laws, their intolerance and their disregard for human rights and normal behaviour.
This morning however all those terrible times were put behind the Mostafaei family. Finally common sense prevailed and a loving wife and daughter joined their dear husband and father.
I am not going to write much more, I let the mass media that were there to cover this joyful event, do a better job than me. Just one note however to finish this post. There was not a single Iranian journalist there, no one from BBC Persian, VOA Persian, Radio Farda or any of those well funded organisations. An observation that once again confirms what I have said, we do not have good reporters outside Iran. We have lazy journalists who at best like to interview people.


Watch the footage of the reunion here:
http://www.vg.no/nyheter/innenriks/artikkel.php?artid=10027091
Cry No More Parmida. No One Will Arrest Your Mum or Dad Now. 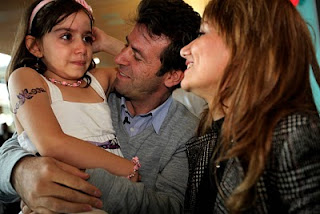 Interesting... So how come Iran's regime did harass them when they were Iran to put pressure on him but did not stopped his family of going out of Iran? Weird.

Well it's good to see the family reunited. But shameful like you said, that it wasn't more high profile and properly reported and celebrated in the context of someone standing up for freedom's and human rights. At a time when Karroubi's house can be surrounded by chanting thugs for 5 nights in a row, it once again just proves to the world that Iran's regime really isn't a civilised member of society of the International coummunity. There is no proper law and order anymore when the Police just stand to one side and allow the equivalant of lynch mobs or Witch Finder Generals to do what they like at the behest of that cancerous black vulture called Khamanei.

Dear Azarmehr, it is not as though, VOA, BBC and Radio Farda, didn't know or posess the means to report things and events of this sort.
Their Ignorance of these matters is practised deliberately.
They don't WANT to report things like these, because these so called news organizations are not merely propagandist mouthpieces of the US and UK Governments, but to the core they are infiltrated by Hezbollahis and other Regime supporters.
So I can only recommend not to expect any meaningful reporting from these "journalists" on matters concerning Iran, they simply won't do it.