It was supposed to be a revolution by the poor and to help the poor. A new Arabic word even entered the Persian vocabulary, Mostazafeen, a kind of Islamic equivalent of Marxist reference to proletariat. All sorts of claims were made that all Iranians will have a roof over their head, the oil revenue will be divided equally and gas, electricity, water and buses will be free. Three decades on, the claims are still uttered, in the footage below, Ahmadinejad in a press conference in Copenhagen tells the foreign media, "95% of the Iranian population were below the poverty line before the 1979 revolution and now We have no one in Iran who is in need of their daily bread"

Revolutions in the name of the poor are always full of rhetorics, regurgitated by an army of useful idiots around the world who idolize and justify populist dictators. The reality however is very different. Three decades after the 1979 revolution in Iran and after a decade of incredible oil revenue, patients who can not pay their hospital bills in Iran are thrown out of the hospital and left by the roadside to die: 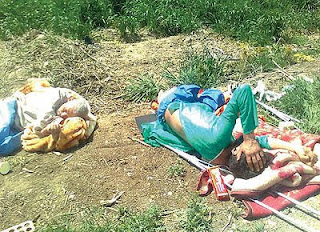 These pictures were taken by Iranian daily Jahan News. One of the patients suffered a broken leg and was unable to pay a $200 bill, the other was an elderly woman who had suffered burns to her body.

This is the Islamic Republic. In the current turbulent period of revolutions in the Middle East, lessons of the 1979 Islamic Revolution and the emptiness of rhetorics must not be forgotten.

Where is the Islamic compassion, charity and good deeds. Its all humbug as far revolutionary Iran is concerned.

You hit the nail on the head. The leaders of the Islamic Revolution were able to galvanize the frustrations of people with promises of utopia. The sooner the IRI falls the better off the Iranian people will be.

Ultimately the Islamic Republic now only feeds the Revoluntary Guard and Basiji. -Just to ensure their paid off loyalty to keep a debased and totally corrupt state in power. Khamenei has billions -living the in Shah's old palaces. But hey, that's OK eh? After all Allah must've degreed that he can be a murderous, cheating, robbing old tyrant bastard living at the expense of the people eh? Yep -how proud and grateful the suffering, unemployed, drug escaping, and penny stretching normal Iranians must be of this black evil preacher to keep him and his twisted regime in clover!
Still, with Ahmadinejad's websites now being filtered within the IRI, again it just goes to show that if you forge alliances with thieves ad murderers, ultimately they all just end up stabbing each other in the back! Thus, far from a hidden Iman returning to applaud and praise the IRI's discabable sins, it will actually be the circle of Satan's fire which will utimately consume it's wretched medieval existence both from outside and within! Azardi Irani. And soon...

Shared! Where are the usual human rights watch and amnesty when there is REAL injustice? Too busy cosying up to terrorists and the very people who make this appalling state of affairs happen! This is too heartbreaking. ;((

SEE A MULLAH? MURDER HIM AND EAT HIS FLESH!

GOD IS YOUR GUIDE! YOUR BULLETS ARE YOUR REFUGE! YOUR SOUL IS YOUR SHIELD! SIEG HEIL! KILL ISLAMIC OCCUPIERS!

You ask others to do all this and you cant even leave your name??