Bravery Medal for a Psycho 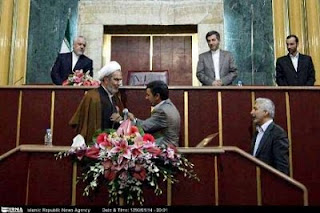 While the world is admiring the courage of the likes of Iman Al-Obeidi and the Syrian woman who stood up to Bashar Assad in the middle of his sycophants, a different type of person is being rewarded for a different kind of "courage". Mola Hassani, the Friday Prayer leader of Oroumieh, a psychopath who shopped his own son, Rashid, for being a Marxist. Rashid was subsequently executed, much to the delight of Molla Hassani.

The psychopath Friday Prayer leader of Oroumieh, also refused to attend his daughter's funeral after she committed suicide. This is one heartless evil cleric, but of course he is the ideal type of psycho-path neanderthal, which the Ahmadinejad administration chooses to reward.

Mohammad Reza Rahimi, former Rafsanjani crony who switched side to Ahmadinejad and under investigation for massive fraud, and next to him Ahmadinejad's messianic in-law, Rahim Mashaei and finally Hamid Baghaii, another one of Ahmadinejad sycophant, who has referred to Ahmadinejad as the 'Cyrus of our Times', can be seen applauding Molla Hassani for his "courage".
Posted by Azarmehr at 6:29 AM

He should be hospitalized in a mental ward alongside the rest of the regime's leaders.

That's nothing. Next up we'll have the Mad Mullah Mafiaso Oscars. The Islamic Gestapo Bafta's. The Theocratic Tyranny Emmy's. And of course the Nobel Prize for greedy, oppressive, murderous power all in the name of some God! However, get your nominations in fast! Because when it comes to the current regime in Iran, there are SO MANY suitable candidates, you're bound to get crushed in the rush!

You all know what to do with these abominations when they fall, dont you?

A lifetime in chains, digging in the ground and generally just doing hard labour... One piece of bread a day, a little water, and if they happen to die due to a malnourished state, OOPPPS, too bad!