The Regressive Moral Values of an Iranian Opposition Website 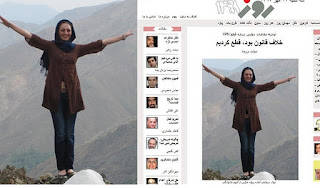 It was a palpable story. The suicide of two young Iranians, Nahal and Behnam, had all the elements for a gripping movie, a mixture of love, social pressure, politics and the sheer feeling of gloom and despondence felt at present by so many young Iranians in the repressive state of the Islamic Republic.  When the story hit the headlines, for me however, the most important headway was that the world also learned about the kidnapping and disappearance of Iranian human rights activist, Kouhyar Goudarzi and the shameful imprisonment of Kouhyar's mother, who was dragged out of the bath by security forces in her home, and is now imprisoned in Kerman prison.
This was one of those rare opportunities where the news story had a spin which appealed to mass audiences across the world. Newspapers all over the globe from US, to Italy, to Turkey and many more that I have probably not come across yet, duplicated the story. One would have thought Iranian expat opposition would then cease the opportunity and use this international awareness to campaign for the release of Kouhyar and his mother. It seemed the death of Nahal and Behnam may not have been in vain and some good may come out of it. That is until, the Iranian expat 'journalists' and Iranian 'opposition' websites started meddling in the story.
It seemed for these so called Iranian opposition journalists, the most important thing was not to use the story to pursuit Kouhyar's case but to find out whether Nahal and Behnam had sex or not?! Their method of investigation was also not the tedious procedure of going through Nahal's facebook and blog posts to build a picture of what went on but the more laid back option of talking to Nahal's immediate family on the phone. Calling Nahal's father for example, knowing full well the social pressure at least, which he must be under to talk freely and asking questions which more or less implied, 'where they having sex?'  or "was your daughter against the regime?" and expecting the poor father to tell the truth about his divorced daughter going out with a much younger boy and being a supporter of the Green Movement.
Roozonline, an Iranian opposition website, with a limited and specific readership and columnists who all more or less represent very similar points of view, a narrow spectrum of Iranian elite intellectuals, printed one of these silly 'investigations' in finding out whether Nahal and Behnam had consummated their relationship. The website went one step further however, they even imposed their backward values on a picture of Nahal by photoshopping, see picture above, a small part of Nahal's belly which was showing as she raised her arms in the air while standing on top of a hill.
This is the very same website which lampooned the hardline Islamic Republic daily, Kayhan, for photoshopping Catherine Ashton's picture. A clear case of the pot calling the kettle black by a site which claims to represent Iranian opposition and is probably receiving a grant from some European body.

I don't understand the motives of the Editors of the website.

Thanks a lot, Azarmehr, for this compelling piece of investigative journalism.
Meanwhile poor Kouhyar Goudarzi is said to be kept in solitary in Evin ward 209 http://www.rahesabz.net/story/43541/

Rooz Online is not of the opposition. It is run by reformers or 'eslah-talaban' faction. They are part of this repressive regime and belong to the dust bin of history as well.