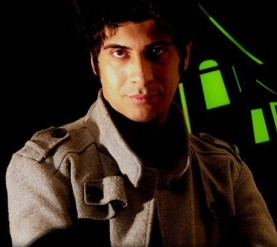 Islamic Republic is at the point of imploding. Huge astronomical fraud and embezzlement is draining the country's coffers dry. Iran's environment is in danger, one of the most beautiful lakes in Iran, the Lake Oroumiyeh is on its death bed. Iran's national heritage is facing damage beyond repair. Today it was reported huge cracks are appearing at Iran's ancient site of Persepolis, the very embodiment of Iran's  identity. The state's enthusiasm for brinkmanship is threatening the country with a terrible war and further sanctions.

But none of the above are considered a threat to Iran's national security, instead what the state is more worried about is the likes of young Arya Aramnejad who dare to criticise and stand by their convictions.

Last Tuesday, Arya Aramnejad attended the court in Sari, which was set up to review his appeal sentence. On his way back, he was kidnapped by state security apparatus and taken away. His whereabouts is still unknown.

His friends in Babol, issued the following statement addressed to the Supreme Leader, after Arya's disappearance:

It has to be said, without much introduction needed, that you jail the best sons and daughters of this country. Not a single day goes by where the disgraceful actions and scandals of your men doesn't shock the world. The events around the world are proving that no amount of brutal crackdown and suppression can stop the just demands of the people and yet you continue to clamp down on the slightest of dissent.

You tolerate all the huge multi billion embezzlements and corruption around you and yet you can not tolerate the slightest criticism by the best sons and daughters of this country. What untold secret are you trying to protect with these arrests and imprisonments? What scandal do you think you will be covered up by arresting Arya?

You accused your opponents of lacking insight and two years later we see how much insight you had when you backed those whom you are now referring to as the 'deviant trend' of exorcists and sorcerers. Is it not so that you are enraged because it is clear it is the likes of Arya who have the insight and not you?

Would it not have been better that instead of all these arbitrary arrests which are proving to be useless, you apologised to the people and made up for your dark past deeds?

The arrest of our kind and wise friend Arya will serve you nothing and shows the depths of your imprudence. We advise you before your time runs out to choose wisdom and righteousness.

The present regime may go but then what?? You will only be truly free by refusing to submit to the koran and islam. Of that, there is no doubt whatsoever.

Couldn't have put it better myself! Nice to see Aljazeera finally get back on track with some Iranian issues in regards to their 'Letters From Iran' programme. Keep it up. Although of course PressTV was quick to slam Aljazeera on some deflective issue no doubt because of it? Speaking of which, have you noticed that PressTV still pollutes the Sky TV satellite with it's IRI propaganda inspite of PressTV largely saying that OFCOM wants to ban them. A bit of cynical 'freedom of speech' rabble rousing there, or a genuine proposition from OFCOM! Time will tell. But NOT too long we hope?Still, no matter... With PressTV's protective agenda of that murderous lying dictator Assad - plus their sickening sycophantic lovelight of both Khamanei and Ahmandinded, PressTV -just like the grudually 'imploding' monstrous Iranian Regime already has the tarnished taint of being on the wrong side of history! Not long now... In the meantime greater eforts should be made to free the likes of Arya Aramnejad. One of the true courageous voices of freedom under pain of death. One of him is worth more than a million worthless cowardly Khamenei's! Azardi Irani! It gets closer!