So we are told just about every protest, every cry for freedom and every liberation movement around the world is in support of the Islamic Republic and its Supreme Leader. Today, the Supreme Leader's message to these liberation movements was read on state TV while video footages of these protests was played over the Supreme Leader's voice as his message of solidarity to the protesters not to give up and stay resolute to the end was broadcast to the dispossessed and the downtrodden across the world.

The Baseej has even set up a website - http://www.wsfall.com/ - both in English and in Persian in support of the Wall Street occupiers.

The only thing is though, you never see any of these protesters carry a picture of the Supreme Leader or any other IRI figures. Instead sometimes you see them actually carrying pictures of the very victims of the Supreme Leader's absolute rule or express solidarity with the dissidents in Iran. Like this protester in Wall Street who is showing a picture of Peyman Aref, the Iranian dissident student who spent two years in prison and received 74 lashes. Peyman has once again been imprisoned for having prayed by Neda's graveside last week: 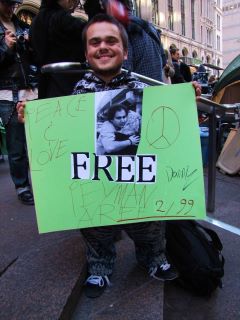 It is such simple acts of solidarity that undermine the entire investment of despots to jump on the bandwagon and their hollow propaganda in claiming their leadership of protests.
Posted by Azarmehr at 3:00 AM