The Impeachment of the Labour and Welfare Minister Today 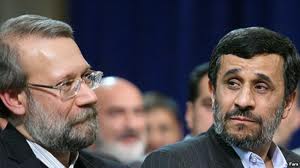 The impeachment of Abdolreza Sheikholeslami, the Minister of Welfare and Labour in the Islamic Republic, today quickly turned into a farce and became a slinging match between Ali Larijani, the Iraqi born speaker of the Majlis and Ahmadinejad.
While Ahmadinejad revealed an audio tape that showed the corruption of the Larijani brothers, Larijani went as far as accusing Ahmadinejad and his associates of having ties with MeK! Majlis also voted for the removal of the Welfare and Labour Minister.

Background to the Impeachment:

This was not the first time, Ahmadinejad's minister of Welfare and Labour, Sheikholeslami,  was facing an impeachment. In April last year too, the Majlis tried to impeach Sheikholeslami. The reason for his impeachment was the appointment of Saeed Mortazavi, a former prosecutor with a long list of charges and accusations against him ranging from murder, rape and embezzlement, as the head of the Welfare Ministry's Social Security Funds, a fund awash with money from pension funds of working people.
A deal was struck at the previous impeachment of the minister between the government and the deputies. The Welfare minister promised to remove Mortezavi from his position in return for the MPs revoking their signatures from the impeachment.

Mortezavi's troubles were not over however, not only the Supreme Audit Bureau said his stay as the head of the Social Security Fund was illegal, the executive board also voted him out. Mortezavi ignored the board and the audit bureau and remained in his position with the firm support of Ahmadinejad.

Today, the Minister of Labour and Welfare had to face the Majlis deputies again for impeachment. Ahmdinejad gambled on his usual tactics, i.e. "if you go after my cronies, I will spill the beans on you!" A tactic which so far seems to have worked with the Supreme Leader.

Ahmadinejad tried to put Larijani under pressure, saying members of the Majlis board had asked him not to play the audio because it was so explosive, but Ali Larijani ignored his threats and said "Go Ahead, Say it all and don't miss out on any bits".

Ahmadinejad said the audio file was only a snippet of the entire meeting between Ali Larijani's brother, Fazel with Saeed Mortezavi, a mere 25 minutes from a 24 hour recording. As the audio started, some MPs started to protest, the audio was not clear, so Ahmadinejad started to read a transcript of the audio. The transcript is too long to quote here word by word, but basically Larijani's brother, Fazel, wanted some quid pro quid favours from Mortezavi for some lucrative financial opportunities, giving examples of how in the past he had exploited the positions of his two powerful brothers, one as the head of the legislative powers and another as the head of the judiciary to pave ways and smooth things over for others. The transcript is like dynamite, it shows corruption, nepotism and cronyism spread to every core of the Islamic Republic. In any accountable and democratic country, this transcript alone would bring down the entire establishment.

Larijani however seemed unmoved by Ahmadinejad's audio and spoke after Ahmadinejad had stepped down from the podium. He accused Ahmadinejad and his clique as acting like Mafia and said "what if I had filmed your brother's meeting with me in which he talked about the corruption of your associates and their ties with the MeK!" - listeners who were following the live Majlis sessions on the radio, must have grasped for air at this point. This was Punch and Judy, Islamic Republic style. MeK or PMOI are the exiled organisation who sided with Saddam during the war and assassinated tens of Islamic Republic figures in the eighties, paying a heavy price with thousands of their members and supporters having been executed in retaliation by the regime. To accuse the associates of the head of executive power in Iran to have ties with the PMOI is no light hearted matter.

Ahmadinejad wanted to get back behind the podium but Larijani said he had his chance. Ahmadinejad threatened to leave and Larijani said "please do". The vote was cast: 24 abstentions, 56 against the impeachment and 192 voted for the minister to be removed from his post.

Potentially this could lead to Ahmadinejad having to ask for a vote of confidence for his entire cabinet all over again. The constitution demands this if more than half of the cabinet ministers have been replaced. Ahamdinejad however has muddied the water by merging some ministries together and the Guardian Council will have to decide soon.

Ah, the Regime chimp and baboon having another childish spat eh! Each of course being the equally corrupt cheats and Khamenei cowards in the eyes of the people. For Larijani's part, he knows he simply has to sit back and let this lame duck scape goat president serve out his term before his jail sentence then begins! It's obvious the Regime are gonna blame all of Iran's woes on Ahmadinejad as some cynical get out clause once he's gone. The big question is of course, will the Iranian people just sit back and let this Planet Of The Apes regime still make monkeys out of them?

P.s. Now with the arrest of Mortezavi, the ides of March are definately looming. Khamenei and his Larijani band of brothers will now work overtime to whitewash the Regime squeaky clean by throwing all the muck and dirt at Ahmadinejad's feet! If I were him, I'd stay in Egypt - but knowing him, his deliberate ignornance and smarmy ego gullibilty will just sleepwalk him straight into jail. The cynical Regime to present a boo-hiss villian to the people -in the desperate hope that all of their oppressive and corrupt crimes might be overlooked or absolved just before another sham election!