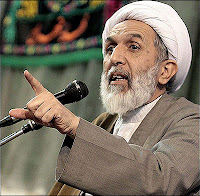 "Syria is our 35th province and a strategic province for us. If the enemy attacks Syria and Khuzestan [Iran's oil rich South West province] simultaneously, our priority will be to save Syria"

These revealing words were uttered by Hojjat-ol-Islam, Mehdi Taeb, the head of the Strategic Ammar Base, an institution set up to co-ordinate the active forces against the "Soft Ovethrow" plans of the "enemies of the revolution" and to monitor the activities of the counter revolution.

Taeb who was speaking to the gathering of Basij student officials, emphasised the importance of Basij forces in managing urban warfare by saying "Syria had an army, but this army was not able to deal with urban warfare, therefore Iran suggested to the Syrians to set up their own Basij. Syria then set up its own Basij with an initial force of 60,000 Hezbollahi forces and they replaced the regular army in dealing with the urban warfare"

Taeb's words have caused outrage amongst Iranians. Assieh Bakeri whose father and uncle are two of Iran's prominent war martyrs,  reacted by saying
"My father's body and my uncle's bodies still lay in the waters of Hoor. The land of Khuzestan is still the only source of comfort for us..Khuzestan is the resting place of my father..Mr. Taeb,  wherever your priorities may be, our priority will always be the soil of Iran"

Poor Bashar, if only he knew he was just another provincial governor and not a president.
Posted by Azarmehr at 3:29 AM

Basically defending the gun-running mullah mafiaso machine is the most important to this Regime. Islam and it's 'Resistance' against Israel has always been just one big long con and dupe excuse to feed the corrupt and criminal back pockets of oppressors and democratic assassins which typify the bully boy axis of Khamenei, Assad and Nasrallah. After all, when an Iranian Commander is shot dead on a road between Demascus and Hezbollah in Lebanon, this also exposes the real hypocrisy, tyranny,and the REAL foreign meddlers and terrorists stoking up the war in Syria! Those who from the beginning have instigated and assisted in mass murder and torture to put down any proper democratic aspirations of all the people's in Syria, Iran and Lebanon! Again, we can only hope that once Assad is soon dead, the other Regime's that thrive on fear, intimidation and brutality will be next in line to join him!