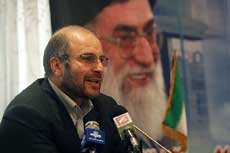 In any normal presidential elections, you would expect the candidates to talk about their plans and policies to improve the lives of the voters, not in the Islamic Republic however.

There are many problems in Iran that the next president will inherit. Apart from the worsening economic conditions and people's living standards dropping on a daily basis, there is killer air pollution in major cities, there are looming environmental catastrophes to deal with, unemployment and social malais like increasing drug addiction and prostitution etc. Yet the candidates are not talking about how to resolve air pollution or bring down unemployment, there are other issues which seem to have priority for the candidates in the Islamic Republic. For example, Tehran Mayor, Mohamad Bagher Ghalibaaf, a former pilot trained in North Korea, speaking at a gathering of Baseej, proudly claimed as his badge of honour, his role in putting down the student protesters in 2003 and in 1999.
"I was the head of NAJA [Law Enforcement Forces] at the time [2003] and I went to the national security meeting of the interior ministry. The reformists were dithering on giving the permission for the security forces to enter the university. I spoke to them very harshly there, even used profanities which I shouldn't repeat here and I forced them to give me the permit for security forces to enter the university and to shoot"

Ghalibaaf also proudly tells his audience that during the student uprising in 1999, he was on the back of his 1000 cc motor bike beating up protesters with a stick.

Of course Ghalibaaf is a shrewd man, its not that he doesn't care for votes. He knows the audience he has to appeal to are not the voters but the establishment figures, the Revolutionary Guards and the Baseej chiefs who want to be reassured the candidates will defend the system if the going gets tough. Thats where the votes will come from not from the voters.
Posted by Azarmehr at 9:00 AM

Email ThisBlogThis!Share to TwitterShare to FacebookShare to Pinterest
Labels: ghalibaaf

Waybec said...
This comment has been removed by the author.
1:58 AM

Well since Khamenei last time installed Ahmadinejad - his pet chimp who ultimately turned round and bite him, this time Khamenei is bound to put into place some Gestapo type baboon - who'd sooner bare his teeth against the people! And since Ghalibaaf has already boasted his thug credentials - I think we can all guess who his next puppet president will be! After all, voting in Iran now has about as much voice and value as getting a critical Comment against the Regime printed on Presstv! Zero!