Ultimate Humiliation for the Post of Presidency in the Islamic Republic 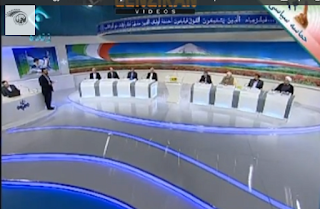 The live televised Islamic Republic presidential debate, shown on state TV today, quickly turned into a hilarious farce that made many viewers laugh aloud as they watched something which was more like a game show than a presidential debate.

Eight approved candidates were asked random questions about their plans to sort out the economy and none had any specific solutions but merely described the problems and hardships as they stand now.

There was a glimmer of hope that Aref would transgress the red boundaries and spice up the bland debate when he talked about the necessity for freedom of speech, the freedom to criticise and the benefits of using experts regardless of their factional loyalties, but Velayati quickly dashed these hopes by saying experts should all be loyal to the regime and obey the Supreme Leader. A pre-condition that all candidates had to nod and agree to immediately.

Tehran mayor and one of the presidential candidates, Mohamamd Bagher Ghalibaaf, had a  laptop in front of him but it was unclear what use he was making of his laptop. He started almost everyone of his replies with the "In the name of Allah, the most compassionate and the most merciful" and plugged his successes as the Tehran mayor. For example he boasted about setting up the 110 emergency telephone number which gave equal access to all citizens without any discrimination to call the police as an example of equal opportunity for all and a precursor to his economic fairness policies.

Jalili seemed to think the answer to all problems was to continue with the revolutionary dialogue and endeavour.

Seventy Two Year old Gharazi boasted about his generation having secured the support of 98% of the population for the Islamic Republic and pined at how that support over the years had dwindled by his successors and their mismanagement.

Aref and Adel exchanged success and failure stories of reformist factions versus principalist factions when in government.

Rezaei suddenly deemed the un-Islamic architecture of the new buildings to be a problem of high priority. All were critical of Ahmadinejad's years as president with Jalili being the least critical and promising to continue with much of Ahamdinejad's policies but in a better managed way .

Hadad Adel thought Iranians should change their Western lifestyles to an Islamic life style and hence reduce consumption and the need for the present uncontrolled chaotic imports.

All said they would continue with the subsidy cash handouts and either increase it or include basic commodity hand outs as part of their plans but admitted that the cash liquidity injection in the economy by the payments is causing soaring inflation which means less purchasing power for people and difficulties in government's balance of payments.

And so the first half of the program went on with the candidates racing against each other, within the three minutes time they each had allocated, to say nice things like meritocracy, fulfilling the potentials, support for production, turning threats into opportunities, making Iranians proud etc.

The best was to come in the second half however. Candidates were suddenly shocked into thinking the multiple choice questions the presenter described they were going to be asked was a general knowledge quiz. Aref displaying the most fear and outrage said last time he answered multiple choice test questions was when he was a student 40 years ago and he was not going to take part and answer the questions. Other candidates also backed Aref. The presenter had to go out of his way to say the format was a joint decision by the lawful bodies within the state TV and the Guardian Council and that it was not a general knowledge test. With that reassurance by the presenter, other candidates calmed down but it was too late  for Aref who had categorically stated he would not answer the questions.

Next shock came when the presenter said the multiple choice questions will now be followed by a picture round. Aref back tracked and said he will take part in the picture round. Eight pictures were shown in total and each time, candidates were asked what was the first thing that came to their mind?

A picture of a US mine in Utah was one of the eight pictures that was shown. Aref thought it was a valley in Iran with the potential to become a tourist attraction while Gharazi thought it was an abandoned mining project in Iran where the owner had already fled or had been imprisoned. Rezaei confidently said he recognised the mine to be somewhere in Yazd, Central Iran. Rowhani thought he had visited the place recently and Velayati too thought it was another unfinished government project. Jalili expressed regret at how this abandoned mine demonstrated not using the full potentials of the country.

A picture of a traffic jam brought up the air pollution problem for the first time in the election campaign. Ghalibaaf said during his time as the Mayor of Tehran he had asked everyone, who has the "ownership" of this problem and no one knew. Gharazi simply sufficed by saying "May God have mercy on all of us".

Another picture of a crowded bazaar prompted replies like "it shows there are a lot of people but no one is spending because they have no money in their pockets and instead are getting in each other's way".

The most entertaining program ever to be shown on Islamic Republic state TV ended with the last picture question displaying a clock that showed the time to be at 7.15 and the presidential candidates having to say what it made them think of!!! 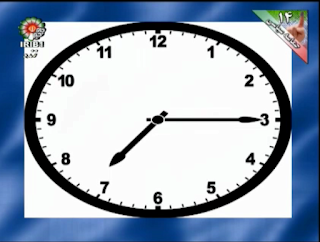 I do appreciate your information.
Iran is one of the cases that will be analised in ILO conference in Geneve. I would enjoy very much to contibute to their condenation by ILO...
In order to defeat iranian government arguments I would like to know if there are laws, rules or ... how can I prove that candidates (for a job) are disqualified on account of their political opinion?
Is there any law forbiding Bahai from higher education?
Are you aware of such situations?
As I told you, I used to follow the iranian situation... but I don't understand a word of Farsi and in such a short time I need help.