Why is propaganda by tyrants so stomach churning? Because only they can twist facts so much and so badly. Here is an example of Islamic Republic state TV propaganda below.

The state TV presenter asks the question "what would happen if we allowed BBC Persian reporters to come to Iran and freely walk about and interview the people? What would be their reaction?"
So to answer the question, he puts on a tie and a BBC sign on his microphone, calls himself Arya Azadmehr (almost Azarmehr),  poses as a BBC Persian reporter and in the most amateurish stage managed trash way makes out the majority of Iranian people have no wish to talk to a reporter who works for foreign press and are weary of them not praising the Islamic Republic as they should.

One "passer-by"even calls him a spy and tells him to get lost. All the ones who do talk to him say they will vote in the "elections" on Friday and all the ones who talk to him, say they are prepared to endure the hardships of sanctions for as long as it takes but they are not prepared to compromise.
All unequivocally believe in the Islamic Republic and will support it to the end.

The "passers by" are orchestrated to pretend they are from all walks of life in Iran. Even the women with loose hejab and make up and the one guy wearing a decadent tie are supportive of the Islamic Republic. In short everyone loves the regime and all say what the Supreme Leader says and that alone justifies why there should be no foreign reporters in the country!

Here is a picture of reality on the other hand. Press TV reporter, Narges Mobaleghi, freely walking in the streets of London with the protection of the UK police and talking to passers by. 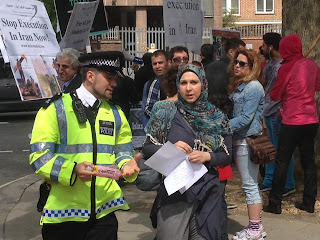 Here we go again - 'Aren't we soooooo clever by treating the Iranian people dumb? What a laughable insult the Regime is to anyone's intelligence. Pity the Regime ain't as smart as the black suit this clown of a reporter put on! Deh what? - Making himself look presentable also made him look professional - so hey - he must be working for the BBC? Ha! They can't even get their own jokes right?

Evidently, no one has learned anything. The State press won't learn. The people in Iran haven't learned that - despite the serious uproar of 2009 - civil disobedience and non-compliance especially when it comes to voting this time around might actually serve the greater good of freedom in Iran in the long-run. But, everyone, including Iranians in London voted. They all voted not for the greater good of Iran but in fact they voted in favour of the IRI establishment.

I haven't learned - I still read your blog and post here from time to time.