So Who Wants Iranians to Vote on Friday? 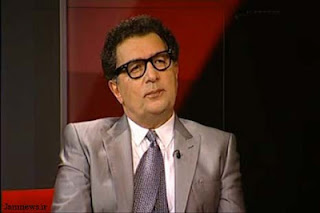 The propaganda on Iranian State TV calling Iranians to go to the polling stations and vote on Friday is almost non-stop. Patriotic music, although any mention of Iranian nationalism is normally frowned upon as a non-Islamic thing, is unashamedly played throughout the election campaigns.

Hundreds of "passers by" are interviewed both inside and outside Iran by state TV, all without exception say its everyone's patriotic duty to take part in the elections and "honour the martyrs of the revolution and the war with Iraq by voting". State TV seems unable to find even one Iranian citizen who has decided to boycot this election farce.

Mashad's Friday Prayer leader, Ayatollah Alamolhoda, told the faithful during his sermon last Friday, that "those who do not vote on the election day will definitely go to hell".

Tehran's Friday leader, the ghastly reactionary Ayatollah Ahamd Khatami also told his sermon goers that "under no circumstances should they stay at home on the election day" and he predicted that "with the help of God, we will witness a maximum participation by the people".

Ayatollah Makrem Shirazi, the holocaust denier whose representative office in Harrow Road in London, received a grant from Brent Council for 'promoting religious freedom and religious tolerance' also said it is the religious duty to vote and "all should go to the ballot boxes on the election day even if they cast a blank vote!"
The most blatant confession that the regime is not that concerned about the vote count but is most keen on showing off pictures of long queues to the outside world.

The Supreme Leader himself makes it very simple, if you want to support the regime then you will vote and if you want to weaken the regime, then you will boycot. "What the enemy wants to see is empty polling stations, they want people to say 'why should I vote?' and people to think they can not make a difference, but those who want to see us strong will come and vote" Supreme Leader said during one of his recent speeches.

All the above is as you may have expected, however the call for people to vote also comes from other unexpected quarters, like BBC Persian.

BBC Persian employee, Massoud Behnoud who has dubious connections with the Islamic Republic,  has once again broken with all professional media and journalistic norms and rather than helping the BBC Persian to broadcast the Iran election news in a non-partisan way has been arguing restlessly for Iranians to go and vote this Friday both inside and outside Iran. His logic is the same l I have heard in the past 34 years by those who claim they are not with the regime but still go and vote, i.e. 'Lets save things from getting worse'

Massoud Behnoud, also runs Roozonline, a website that receives its grant from Hivos, a Dutch organisation which in turn is funded by the government of Netherlands. Not sure if it is even allowed for a BBC Persian employee to also run another news website but the way Behnoud always seems to do the Islamic Republic's dirty work is disturbing as always.

Not Voting doesn't mean you've betrayed your democratic rights, it just means the Regime has! So Why pander to their paranoia and show up. Every face is just Khamenei's anyway!