A Public Execution in Iran with a Slight Twist 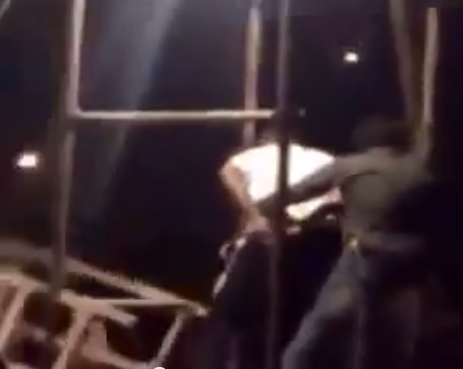 Public executions in Iran have sadly become a normal event since the Islamic revolution in 1979. Astonishingly some of those who go to watch these medieval displays, take their young children with them too. Adults along with their children watch masked executioners put the rope around the condemned's neck while the condemned accepts his fate and submits passively to the executioner.

Last week there was a public execution in Iran that didn't quite go according to the plan. The stocky man that was about to be executed asked to see his mother for one last time, but his request was refused. The stocky man who looked strong, struggled with his executioners and broke his handcuffs. Another law enforcement officer tried to walk up to him and was toppled over as the condemned kicked the officer in the chest. The crowd cheered the condemned as the officer fell off the scaffolding, but finally he was subdued by seven officers and the rope was tied around his neck. The condemned man struggled as his neck dangled from the noose until his neck broke. The same crowd who had cheered him kick the law officer in the chest, cheered again when his neck broke and he became restless.

Its all good entertainment on a typical early morning in the lovely Islamic Republic that Jack Straw described as buzzing like Madrid:
http://youtu.be/P2k665GkAZM

Email ThisBlogThis!Share to TwitterShare to FacebookShare to Pinterest
Labels: public execution in iran