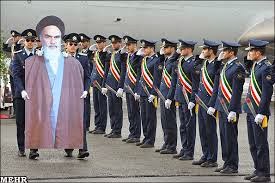 "This house became a ruin since the day,
our thinking and reasoning became dark and grey"

It is still mind boggling how millions of Iranians, intellectuals, Western educated and the middle classes included, came out into the streets in 1979 to destroy their own freedoms, their own standard of living and the future of the next generations of Iranians.


Yesterday, was the anniversary of the return of Ayatollah Khomeini to Iran after a 15 year exile.  A day which most Iranians today regret, but thirty five years ago, they were swept by a wave of frenzy and incredible stupidity to welcome him.
"when the demon flees, the angel will return" -they chanted, demon was supposed to be the Shah and their angel was Khomeini!

"Do not be content that we will only build you houses, make your water and electricity free, do not be content with just such things, we will provide you with spiritual greatness and dignity" Khomeini promised the zealous crowds after his return from exile.

Today, many Iranians had to queue up in the cold to receive their "commodity baskets".

Commodity baskets were promised by Rouhani as part of his election campaign to offset the decreasing purchasing power of cash for subsidy they started to receive when the subsidies were removed.

""This house became a ruin since that winter,
When it's breadwinner became a foreign usurper"

Many who had queued for hours were told they were not entitled to receive commodity baskets.

Before 1979, average Iranian income was three times that of South Koreans and more than three times income of the Turkish people. Today, the Islamic Republic of clerics has turned Iranians into beggars and scroungers, despite having had the most oil revenue in the last eight years than the entire cumulative oil income of previous governments ever since oil was discovered in Iran. 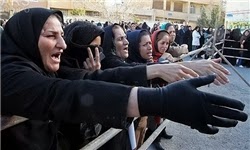 Seeing these pictures makes my heart weep with sorrow. Thirty five years of a religious dictatorship by clerics from the dark ages over Iran has resulted in such misery and indignity. A minority of cunning priests who call themselves representatives of God on earth, have brought about so much tragedy for Iran, not just financial, not just in terms of human lives, not just for our freedoms, not just for the environment etc. but they have broken our spirit.

"How did we become so low and desperate?
How did we dispose of our wit and wisdom?