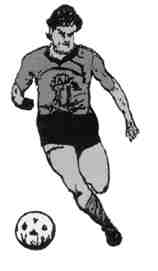 I wonder how many people remember this cartoon? The Iranian cartoonist, Manouchehr Karimzadeh, had intended to show how the Iranian Football Federation was in effect cutting the arm and leg of the Iranian football players by cutting their training budget.

The cartoonist was sentenced to 10 years jail, massive financial fines and a life ban from working as a cartoonist. Why? because the clerics thought the figure in the cartoon resembled Khomeini!

Karimzadeh received very little international solidarity from the Western media, if any.

Also, does anyone remember who at the time was the Minister of Culture and Islamic Guidance? Jack Straw's and Western media's beloved "reformist" Prrrrresident Khatami ;) The initiator of "Dialogue Amongst Civilisations" :)))

Hi there, I've put up some photos from outside the embassy this afternoon.

I've read a good number of your articles on FFI and here. Excellent job my friend. If you care too take a glance, check out my blog http://middle-eastern-rationalism.blogspot.com

Just thought you should know that Martin Niemoller's poem did not reference the Jews. Just another lie that people like you keep spreading.

Get a life anonymous! whether Martin Niemoller referenced the Jews or not is not the crux of the matter, here is it? The important thing is that when we leave others to be persecuted, eventually the tyrant will get round to persecuting us as well.