Rest in Peace, You will not be Tortured no More 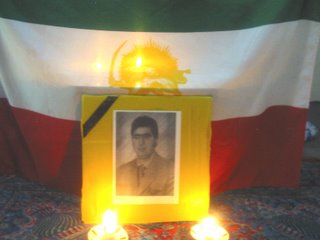 I was away last week and did not have access to the internet. Even my mobile reception was very limited, and only every now and again I was able to read my text messages. This is how I heard about the murder of Akbar Mohammadi in the Islamic Republic prisons. I was actually numbed for a few seconds when I read the text of Akbar's murder. Only a few weeks earlier, Akbar's sister had sent me a copy of his book by email. It was a translation of Akbar's memoirs since his arrest and time in prison. She wanted to know if I can find an English publisher for the book.

It was so annoying to be cut off from the internet and the phone. Once again I had to hold my hands up to those running the Islamic Republic. What a good timing for them to test the waters, what better timing to carry out such a cold blooded murder while the world news agencies are busy reporting the Israel-Hezbollah conflict. Crimes committed by the Islamic Republic don't grab the world media attention even when there is not a lot of news about, let alone when the events in Lebanon are breaking news every hour.

What can we ex-pats do now? I was disappointed to hear that some of the Iranian ex-pats in London had gathered outside the Amnesty International offices. What for? It was not Amnesty that murdered Akbar! Amnesty has done what it can for Iranian prisoners of conscience. Our focus of attacks surely shouldn't be against Amnesty. The Islamic Republic has numerous offices in London representing her interests, why forget about these and demonstrate outside Amnesty's offices?

We have to think beyond of just off loading our frustrations for the sake of it.

To make matters worse when I arrived yesterday, I learned that my new providers Talk Talk, have not connected me to the internet yet as they should have done. So my access to the internet is limited to brief visits to the local internet cafe. I apologise for the delay in publishing some of your comments and most importantly about the delay in writing about Akbar's murder.

Most of all I am sorry for the Mohammadi family. Perhaps the best that can be said at a time like this is, now that Akbar has left us, he will be spared the tortures by the Islamic Republic.
Rest in peace, son of Iran.

Well I tried to call you,then. But I heard you say at your voice mail about your limited coverage. anyway, its sad. the whole package of what is happening is sad.
...