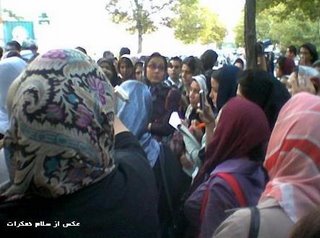 The seminar to launch a campaign against
Islamic Republic's discriminatory laws against women in Iran was banned from taking place yesterday morning by the Islamic security forces.

Women campaigners intended to use this seminar as a launch pad to collect 1 million signatures to demand changes in the discriminatory laws.

Two hundred participants had gathered outside the venue which included Shirin Ebadi and the women's campaigner, Shahla Entesari, but they were told that the seminar was illegal.

Islamic Republic's security forces were seen filming and photographing the participants in order to intimidate them. Western media and cameras did not cover the event.
Posted by Azarmehr at 4:14 AM